The original Analysis Toolbox articles discussed the various market cycles including trends and continuations. This part of the The Trader’s Indicator Series focuses on the Indicator Toolbox as we will discuss various indicators, such as the Calmar Ratio, that are found on most trading platforms. We will discuss the indicator in the context of the chosen market, and if it resonates with you, please continue to do your own analysis with it. Trading successfully is all about feeling comfortable with a methodology and using that system repeatedly even when boredom sets in. I will be discussing indicators in alphabetical order that can be found on the MotiveWave platform. (for a free 2-week trial CLICK HERE)

INTRODUCTION TO THE CALMAR RATIO

The Calmar Ratio was originally designed for Managed Accounts, such as commodity trading advisors and hedge funds. In fact, Calmar is short for California Managed Account Reports, and very similar to the MAR Ratio. Typically, the ratio is based on more recent data so investors get a bird’s eye view as to the risk of their investments during the current period identified. In this article, we are using the last 30 weeks as a measure of comparison. However, many analysts look at a three-year time period, if the data is available.

This ratio can be used to compare any tradable instruments but in this article, I’ve compared four indices as well as eight stocks – four that are performing well, and four that aren’t, based on the Calmar Ratio. This ratio is one of many statistics to measure return vs. risk and when looking to invest money in a fund, the investor can include this measure as part of their due diligence.

We are taking a slightly different twist on the ratio as you will see in the next section, but first, a few comments on the chart above. Of the four indices, the Dow has performed the best according to the Calmar Ratio, as it has the highest ratio of 6.10. The corresponding ratios of the NASDAQ, S&P, and DAX are 4.94, 3.44, and 4.40. This means that during this recent bull phase, the downside risk was the lowest for the Dow, followed by NASDAQ, DAX and S&P. The returns of these four indices since election week in the US are18% for the NASDAQ and S&P, and 21% for the DOW and DAX. 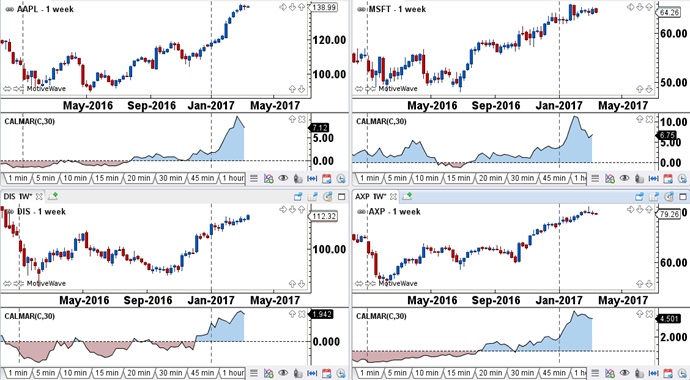 As a trader, I’m going to put on my trader’s hat to analyze the Calmar Ratio and provide tips for using it.

In the example above, we see four trending stocks: AAPL, MSFT, DIS and AXP. A cursory look at the Calmar Ratio shows that it is currently in blue territory above the zero line for these stocks. Prior to these stocks turning bullish, the ratio was below the zero line as a red histogram. When using this indicator, it therefore makes sense to only be in long positions when the ratio is above the zero line. One can use basic technical analysis to enter a long position when the signal turns positive. It also pays to stay out of the stock when the Calmar Ratio is red below the zero line.

Of the four stocks, Apple and Microsoft have the highest ratio at 7.12 and 6.75, whereas Disney and American Express show 1.94 and 4.5 respectively. This implies that the top two stocks performed better on a risk-adjusted basis than the bottom two stocks.

In the chart below, I have selected poor performing stocks as per the Calmar Ratio. All four of the stocks are either trending down or trading sideways and the ratio illustrates that. Intrexon Corp. (XON) and Abercrombie & Fitch Co. (ANF) are trending down and the Calmar Ratio has been below the zero line and red for more than a year. Neither of these stocks were prime buy candidates as per this ratio. Similarly, Whole Foods Market, Inc. (WFM) and China Mobile Limited (CML) have been trading sideways which is indicative of the Calmar Ratio chopping above and below the zero line for over two years. Neither of these stocks were buyable according to the ratio when compared to other healthier performing stocks.

Learn how the Calmar Ratio helps confirm bullish markets and weeds out bearish or sideways markets. Start incorporating this ratio into your chart set-up. Finally, use the Calmar Ratio in developing trading strategies.

Make sure to read the next post in the Indicator Toolbox series, Charting Platforms!