The last ten articles have been entitled Analysis Toolbox and we discussed the various market cycles including trends and continuations. This next part of the The Trader’s Indicator Series focuses on the Indicator Toolbox, as we will discuss various indicators that are found on most trading platforms, such as the Bears Power. We will discuss the indicator in the context of the chosen market, and if it resonates with you, please continue to do your own analysis with it. Trading successfully is all about feeling comfortable with a methodology and using that system repeatedly even when boredom sets in. I will be discussing indicators in alphabetical order that can be found on the MotiveWave platform. (for a free 2-week trial CLICK HERE)

Bears Power is an indicator which gives a visual snapshot of whether the bears or the bulls are in control at any given time. It estimates the balance of power between the bears and the bulls and when there is a tug of war, it cleanly displays when either the bulls or the bears have won the fight. It identifies when price has reached a point where the market will reverse or if the trend is set to continue. 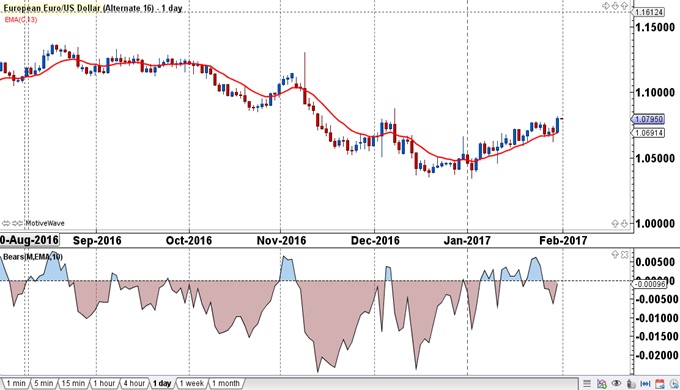 Traders use the Bears Power indicator to recognize trends, corrections and reversals. The indicator tells you whether the market is trending down and how strong the downtrend is. When the Bear Power histogram continues to drop aggressively below the zero line, the downtrend is strong. As soon as the Bear Power histogram bars go from red to blue in a downtrend, the market has started its correction and traders can look to sell again once the histogram turns red.

In the 1 hour EUR/USD chart below, the bears were in control until the histogram turned blue, a sign of a correction. Once the histogram turned red again, that signaled a potential trend continuation. Entering short on the first red candle close below the 13 EMA was the trigger. Because the angle of the price drop was very steep, the histogram made a new low below the previous low. I also call this the rubber band effect, such that when price is extended from the EMA, it usually bounces back to the EMA.

This indicator can also show divergence, which would indicate when the bearish move is running out of steam or momentum. In this example, however, there is no divergence, so no “warning” that price wouldn’t continue lower after that second drop. 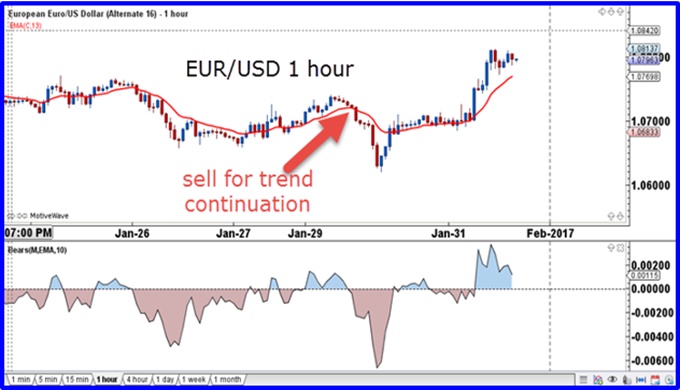 When the Bears Power indicator shows divergence, it can be a sign of a weakening trend or a trend reversal. When price makes a higher high and the Bear Power indicator makes a lower high, this is called divergence with declining momentum. Traders can get forewarned about an imminent market reversal and in this example, a potential move lower, entering the bear camp again.

In the 15-minute EUR/USD chart below, there is divergence, showing that price is running out of steam with the possibility of the bears regaining control. For the next 26 15-minute candles however, price trades sideways as equilibrium is reached between the buyers and the sellers. The other possibility is for price to have a steeper correction, in which case the sellers would be in control again. Not the case here. 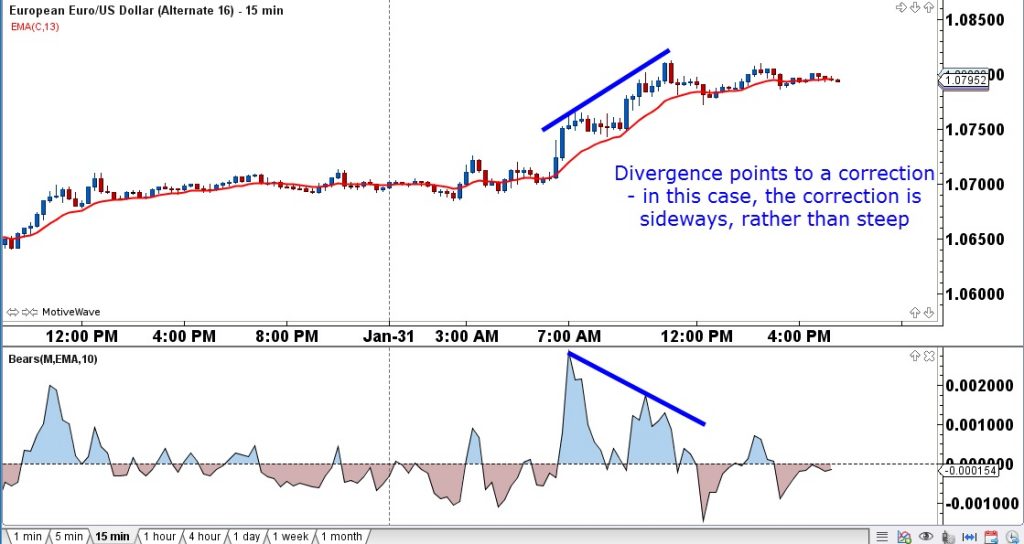 Using the Bear Power provides a decent determination of trend direction, reversion to the mean and trend reversal and when used in combination with candlestick and price patterns, can form the basis of a trading strategy to trade the various market cycles.

Up next is Bollinger Bands® with ATR and Fib Ratios. Make sure to give it a read!