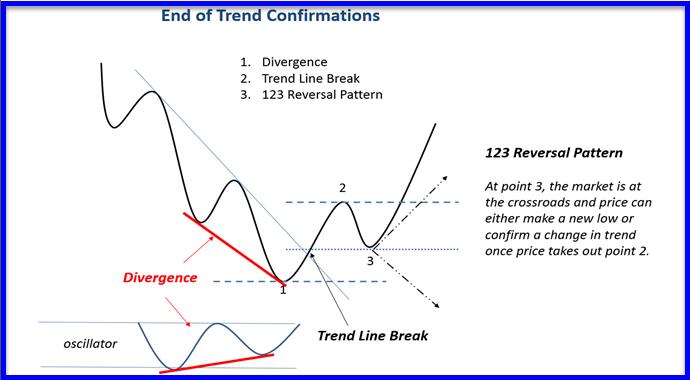 This article in The Trader’s Indicator Series discusses the 123 pattern, an end of trend market reversal pattern, which is also an integral component of the trader’s toolbox and crucial for manual trading. The previous article discussed other end-of-trend market reversals, so this is a continuation of this topic.

123 Reversals are powerful end of trend confirmations worth highlighting. For a 123 top, the market hits a new high labelled as point 1, and sells off to point 2. It then reverses again and trades higher without taking out point 1. This is labelled as point 3. The trade entry trigger is when price trades down through point 2. The measuring objective is the distance between points 2 and 3 projected below the break down at point 2.

On the other hand, in a 123 bottom, as depicted in the example, the market hits a new low at point 1, and trades higher to point 2. It then reverses again and trades down without making a new low below point 1 at point 3. The trade entry trigger is when price trades back up through point 2.

There is a sequence of events which takes place to confirm the end of the trend. The first is Divergence, where the price makes a new low in a downtrend or a new high in an uptrend — but the oscillator does not. The second is the Trend Line Break, and the third event is the 123 Reversal.

The example above highlights the End of Trend Confirmations. To sight Divergence, almost any oscillator can be used including the RSI, Stochastics, MACD and Awesome Oscillator. My favorite is the Awesome Oscillator developed by one of my mentors Bill Williams, because the settings used (5, 34, 5) approximate the end of trend cycle very well.

Excerpted with permission of the publisher John Wiley & Sons, Inc. from The Trader’s Pendulum: The 10 Habits of Highly Successful Traders.  Copyright (c) 2015 by Jody Samuels.  This book and ebook is available at all bookstores, online booksellers, and from the Wiley web site at www.wiley.com.