Earlier this week on Monday, I was on David Kosmider’s TimingResearch show with 4 other stock and options traders and we were all asked where we thought the S&P500 would be at the end of the week – higher or lower from the current level which at the time was 2160. I was the only Forex trader there but on non-US Forex trading platforms, one can trade CFD’s including the stock indices, commodities and even stocks. I stated my view, which was a higher close at the end of the week. One other member of the panel shared the bullish view and 3 members were bearish from current levels, reporting that the top at 2184 was in place. Bullish and bearish views – doesn’t that make the market!

I’d like to explain why I held that view. One reason is the Elliott Wave pattern that was developing on the hourly S&P chart which is posted below. The market played out a 5-wave sequence for the black a wave, which was followed by a sideways ABC correction for black b. At the time, I wasn’t convinced that C of b was complete but a reversal such as a 123 pattern would confirm that the low was in place and that the S&P should move higher. It moved higher, made a new high, and continues to play out this move. I do think we need to hold the lows at 2152 for a continued move higher but I want to discuss another market for clues, and that is the USD/JPY. 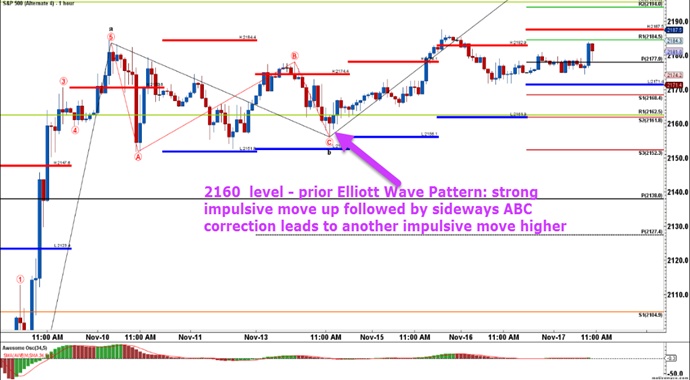 The USD/JPY reversed sharply off the post-election lows at 101.20, as did some of the other dollar pairs, and its bulldozer personality took over as the market plowed over any dollar bears in its wake. True to form, when the USD/JPY is in a trend, it usually stays in that trend for a while, barely giving any retracements to join the trend. That is also the behavior of a wave 3! This was the second reason why I stated that the S&P would close the week higher, based on the view that the markets had taken on a risk-on view and that the USD/JPY and the S&P may have resumed their high correlation status.

Are these markets in sync once again? Maybe it is too soon to call, but I would continue to watch the USD/JPY for clues in the S&P for the rest of the year.

We follow the S&P500 and USD/JPY daily in our Elliott Wave Desk service, along with 11 other markets from currencies to commodities to stock indices. Elliott Wave analysis provides the direction, the view and the context. It is up to you to use your strategy to confirm your trades. To follow our daily Elliott Wave analysis on 13 different markets, sign up at elliottwavedesk.com.

For this week, I encourage you to test your skills with this Elliott Wave analysis while keeping your risk and emotions under control. Have a clear plan and trade your plan. We wish you success in your trading business and please check out my book published by Wiley called, The Trader’s Pendulum: The 10 Habits of Highly Successful Traders.