In this article, we discuss cross-market analysis and clues we can look for when trading our individual markets.

It used to be the case that retail Forex traders only focused on currencies, stock traders only looked at stocks and indexes, bond traders only looked at interest rate products, and commodity traders only looked at their specific commodities. However, nowadays any trader, regardless of their specified asset class, will be curious about currency trends to gain a better understanding of money flow. On top of that, traders will also follow commodity prices to gauge inflation and hence, allow them to predict monetary policy decisions from the central banks. In today’s global economy, it is crucial to look at what is happening outside of our own back yard and to piece together a picture of the entire market. For example, what happens in China and Japan affects Fed rate decisions.

During my 14 years of experience working as an institutional trader at JP Morgan in the 80’s and 90’s, cross-market analysis was crucial in gaining a broader perspective of the markets. Today, with the increasingly interdependent global economies, a sound cross-market approach is mandatory to maintain an edge trading the markets.

All markets are related and by looking at the Dollar, Commodities, Stocks and Bonds, one covers the bases. In an inflationary environment, rising commodity prices imply higher inflation, higher interest rates, a weaker Dollar and eventually weaker stocks. However, in a deflationary environment such as today, higher commodity prices imply economic growth picking up, and therefore a potential pickup in inflation leading to a weaker Dollar and stronger stocks. However, at any point in time, there are various drivers affecting these relationships. For example, during the 1980’s and 1990’s we evidenced disinflation, which resulted in a decrease in the rate of inflation such that global interest rates peaked and continued to fall over the next 20 years. As this environment unfolded, the Dollar rose in value whereas Gold sold off substantially. See Charts below. Current times are being called deflationary with very low and sometimes negative interest rates.

By looking at a Gold chart (adjusted for inflation using CPI on a logarithmic scale), one can easily identify the inflationary, disinflationary, and deflationary decades. In the chart below (Chart 1: GOLD), Gold rises in the 1970’s in an inflationary environment as interest rates skyrocketed (Chart 2: US Government Bond 10 Y); Gold drops relentlessly in the 1980’s and 1990’s as interest rates topple with disinflation, and Gold rallies in early 2000, topping out in August, 2011. 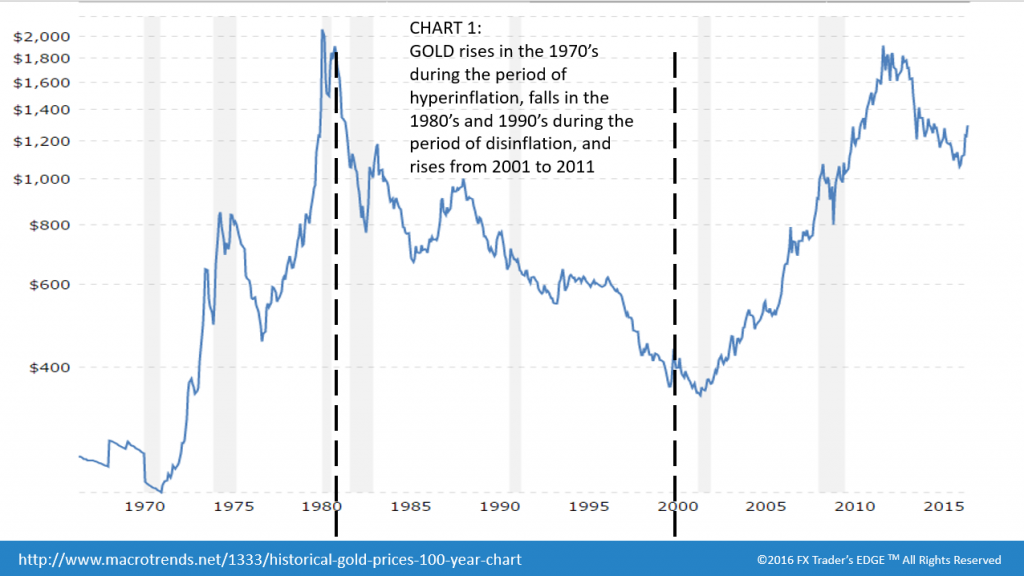 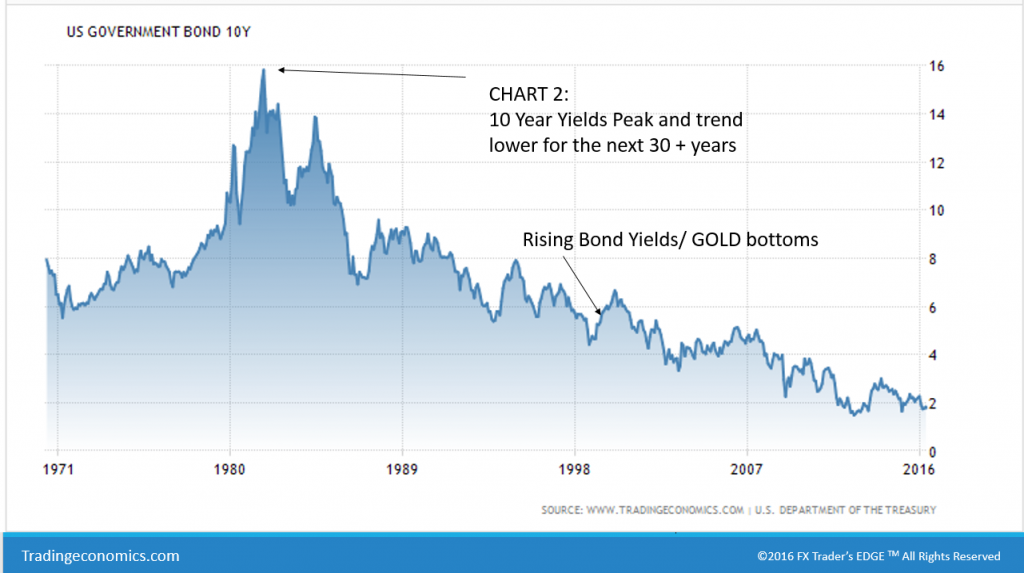 2001 marked the turning point for Gold as the bull market in stocks was ending and the Dollar was peaking. Historically Gold and the US Dollar have an inverse relationship such that when Gold goes up, the Dollar goes down and vice versa. Investors were confused however, since Gold historically is an inflation hedge, and interest rates continued to decline. In other words, there was no sign of igniting inflation and the environment was deflationary. One explanation is Gold’s role as a store of value during economic uncertainty and an alternative investment to the Dollar. Also, the projected Dollar weakness could potentially create inflation, and trigger a move up in Gold.  Chart 3 shows the US Dollar Index peaking in 2001 when Gold bottoms. 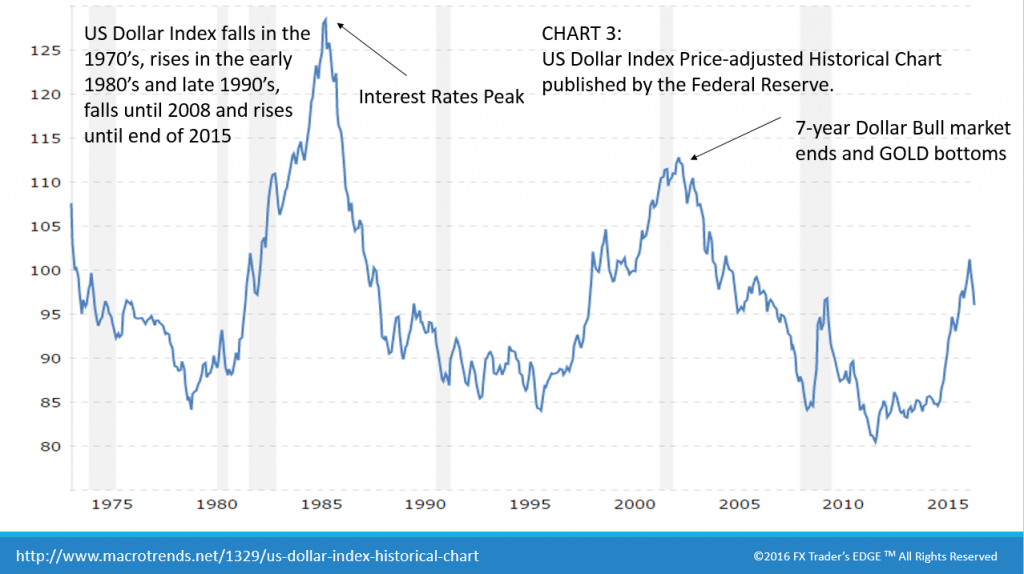 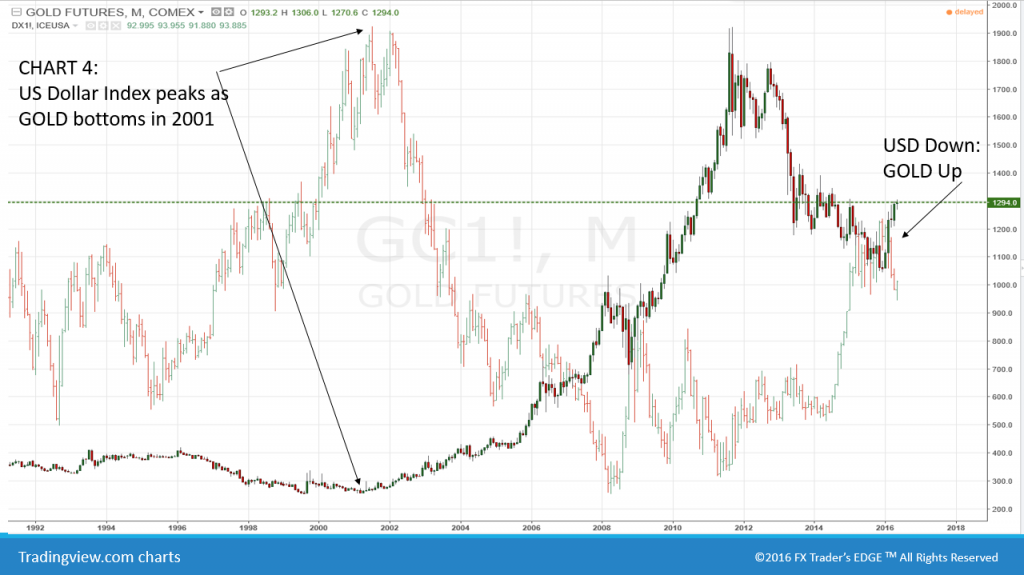 The next relationship we are going to take a look at in Chart 5 is the relationship of the S&P 500 market index to Gold. The 1970’s, which was a period of persistently high inflation, led to a rise in interest rates and a move out of stocks into Gold. (When price moves down, that is the equivalent of selling stocks and buying Gold). During the 1980’s and 1990’s, when inflation slowed down, we saw this ratio move straight up as investors bought stocks and liquidated Gold holdings. When stocks crashed in 2000, investors poured money into Gold, given that it is often viewed as a safe haven asset. Since 2011, a move into stocks and out of Gold ensued as investors were more inclined to choose risk-on paper assets like equities as opposed to physical assets. So far 2016 has seen the ratio move down with a move into Gold. 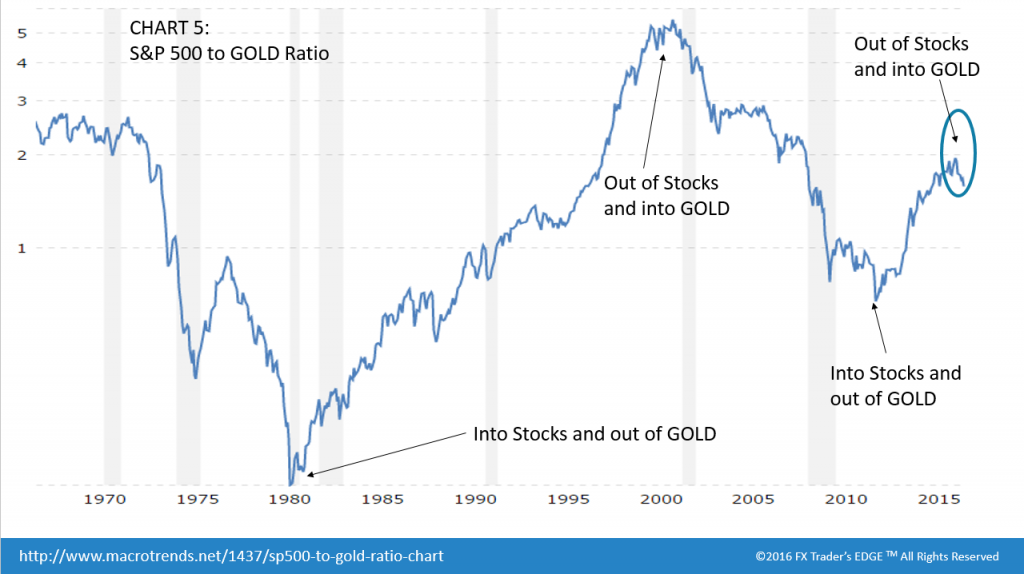 Finally, I’d like to mention the correlation between the S&P 500 to the 10Y U.S. Treasury Bond. Prior to the late 1990’s, the traditional relationship existed between stocks and bonds; both moved up and down together. Since the late 1990’s, stock and bond prices have decoupled and now hold more of an inverse relationship; stocks and bonds trade in the opposite direction. During financial uncertainty, investors bail out of stocks and move into safe haven investments such as US Treasuries and we call that a risk-off environment. On the other hand, in a risk-on environment, investors move into stocks and sell bonds. If one looks at the charts going back 10 years for the S&P 500 overlaid with the 10Y U.S. Treasury Bond, there are many turning points in the S&P 500 which line up with the turning point in the 10Y Bond. 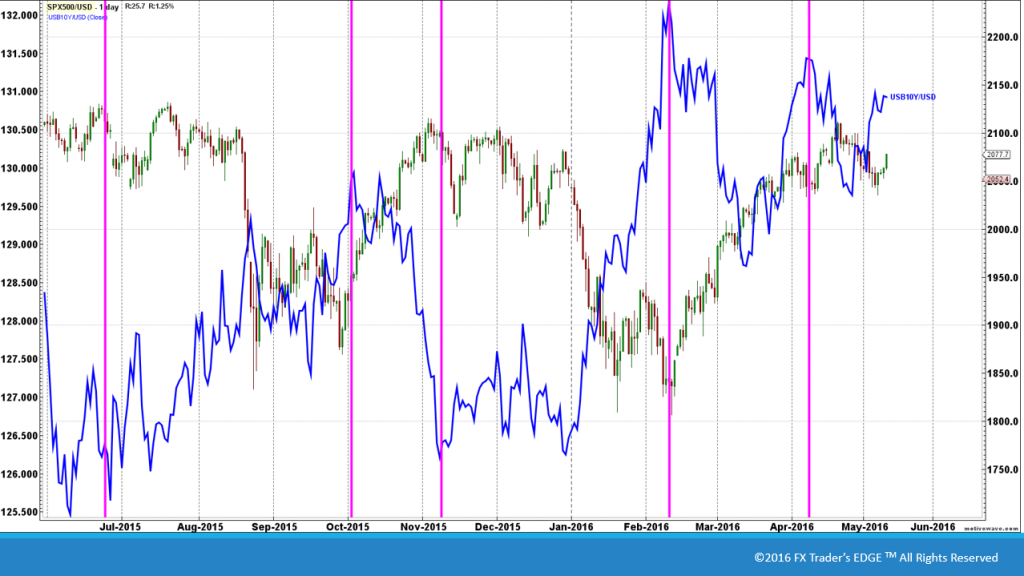 These cross-market relationships can sometimes forewarn of a move in another market and should be followed on a regular basis. The focus of this series of articles will be to look at the global markets to continue to analyze these correlations in order to better understand how the markets unfold.

For Daily analysis, please check out our wave counting services at elliottwavedesk.com or the daily trading rooms at trading.fxtradersedge.com