It was another eventful week as the financial markets are starting to ease its way back from the historical referendum two weeks ago. Equities took a break from its rally to start off the week, as the S&P 500 traded 34 points lower into the FOMC minutes before reversing 57 points from Wednesday’s low of 2073.40 to close the week up almost 23 points. Oil had a tough week as prices traded lower for the entire week – down $3.86/barrel from Monday’s open to close at $45.22. The British Pound on the other hand dropped below $1.30 as the market continues to see an unfavorable outlook for the UK. Meanwhile, safe haven assets finished in the green with gold closing the week up almost $12/ounce, the US Dollar strengthening with EUR/USD dropping 0.79% for the week, and 10-year Treasury yields sliding 8 basis points to 1.52%.

Economic data out of the US was kicked off with the ISM non-manufacturing index which increased by 3.6 points for the month of June to 56.5. The strong number came against expectations for a reading of 53.3, suggesting that the second quarter will be supported by strong domestic demand. On the other hand, the US trade deficit for May increased by $3.7b m-o-m to $41.1b – the largest increase in almost a year. Going forward, continuing headwinds from overseas and a stronger US dollar resulting from the uncertainty caused by Brexit should add some downward pressure to growth.

Last month, the Federal Reserve maintained interest rates at current levels and decided to wait for further confirmation of progressive economic data, as well as the results from the UK referendum. According to the FOMC meeting minutes, fed officials acknowledged the slowdown in the labour market given by the soft jobs number in May. While certain members believed it to be suggestive of a larger slowdown in the economy, some also felt that May’s numbers were understated due to temporary factors. Another possibility that was advocated with regards to the large drop in job gains was due to fewer supply of workers, which is indicated from the rise in wages. Nonetheless, majority of the officials sensed that the May non-farm payrolls heightened the economic uncertainty in the US. On top of that, worries of a potential Brexit certainly put pressure on the Fed given that the outcome was still unpredictable a week prior to the vote. As a result, Fed members agreed to wait until the results of the referendum were known, in order to evaluate the impacts it would have on the global economy. Now that a Brexit is in progress, the Fed will look towards economic data to provide signs of a prolonged period of progression in the labour market, household spending, and inflation.

The highly anticipated June non-farm payrolls was released on Friday to provide the market some much needed information on the health of the US economy. Fortunately the labour market had bounced back quite strongly after a disappointing May, with an increase of 287,000 jobs added in June compared to expectations for an increase of 187,000. This report shows that companies are still focused on hiring workers despite sluggish profits, and volatile events overseas like Brexit. The unemployment rate did however increase from 4.7% in May to 4.9%, but this was due to the labour force participate rate increasing by 0.1% to 62.7%. In addition, wages had also improved slightly with average hourly earnings increasing 0.1% from May. All in all, fed funds futures now imply a 26.5% probability of a move by the end of the year – up from 18.4% prior to the data release. Despite the positive news, EUR/USD ended up trading roughly sideways for the remaining of the session following the release of NFPs. Keep in mind that Fed officials projected just two rate hikes in 2016 during their last FOMC meeting.

Two weeks after the historic UK referendum, the markets seemed to have gotten back to normal as the volatility has eased back significantly. At the same time, the Bank of England released a report about the outlook of the economy, and warned about the challenges ahead. The BOE noted that a decline in the value of the pound and volatile financial markets are to be expected following the decision to leave the Eurozone. The pound had traded as low as $1.2794 this week and Wall Street analysts are calling for a further depreciation in the currency. Governor Mark Carney restated that the central bank is willing to supply $250b of liquidity into the markets if needed. Moreover, Carney also urged lending more money as the BOE cut the reserve ratio for banks, freeing an extra 150 billion pounds for lending. On the other hand, Britain’s ruling Conservative Party began the preliminary stages to select the new prime minister as candidates voiced their strategy in leaving the Eurozone. Proposals included cutting the corporate tax to 15% from 20% in order to encourage business investment. With this in mind, a recent survey conducted by YouGov and the Centre for Economics and Business Research showed that a week after the referendum, 49% of businesses were pessimistic about the economy over the next year, compared to just 25% before the vote. Therefore, a proposal to slash corporate tax rates would make sense in this case, given that companies have lowered their expectations for sales, exports, and investments. Economic data out of Europe wasn’t all that impressive as Markit’s final composite PMI for the month of June stayed flat at 53.1 from May despite beating expectations for a decline to 52.8.

In other news out of Europe, regulators are putting pressure on Italian banks to increase their funds and fix their balance sheets. Capital withdrawals in real-estate funds, a weak economic outlook, and increasing political risks are all leading to a further selloff in Italian bonds. It is believed that about 360 billion euros worth of doubtful and bad loans exist in Italy – equivalent to about 25% of the country’s GDP. 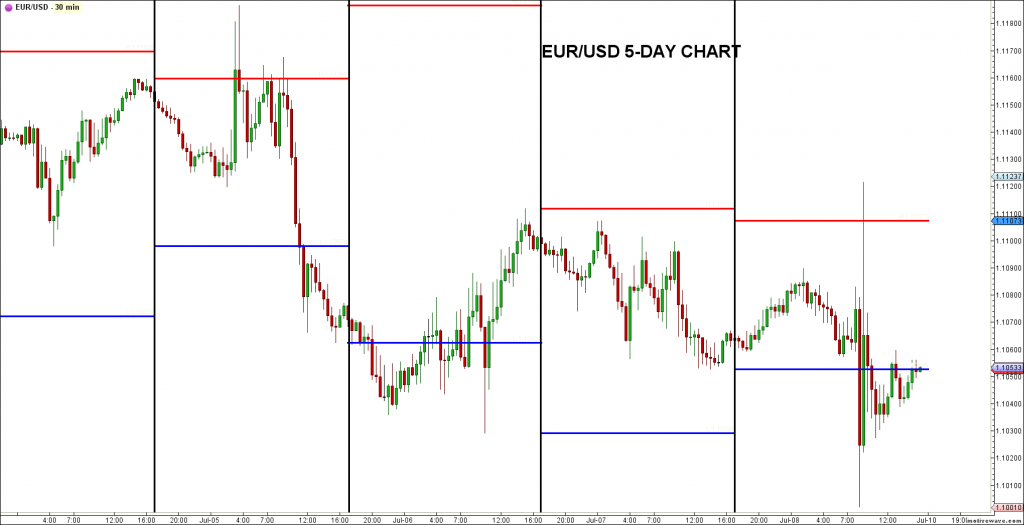 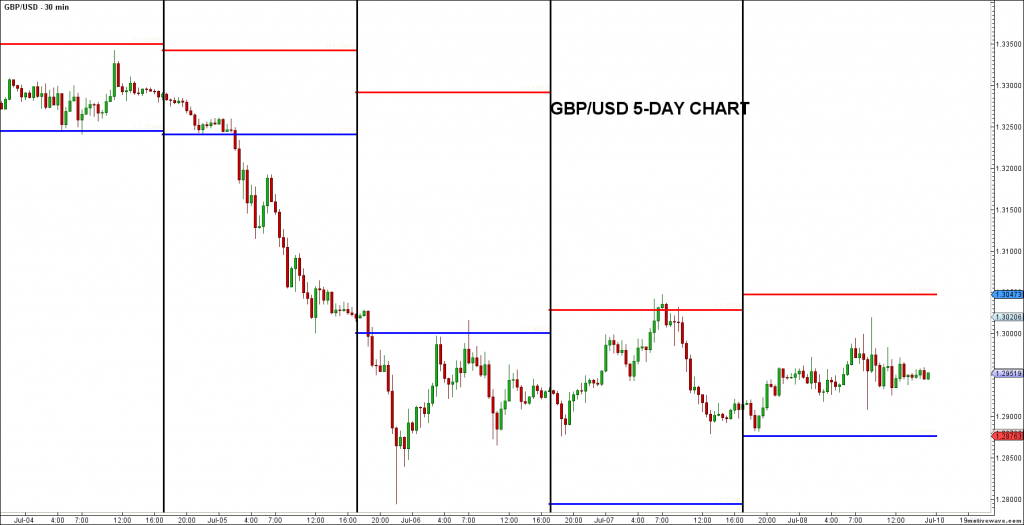 Oil prices dropped to start off the week as worries that a Brexit will slow the global economy, and thereby lower energy demand. OPEC crude production had increased last month due to a small recovery out of Nigeria, which will ultimately make it more challenging for the energy markets to rebalance itself. More importantly, the EIA reported that US crude inventory dropped by 2.2 million barrels last week, whereas the American Petroleum Institute reported a drop of 6.7 million barrels. Prices had traded as high as $47.98 prior to the EIA release, but dropped to as low as $44.89 following the announcement. The record level stockpiles will be expected to increase as 11 more oil rigs were back online last week according to Baker Hughes. In other words, shale oil producers are being highly encouraged by the stability in the price of oil around $45-$50/barrel. 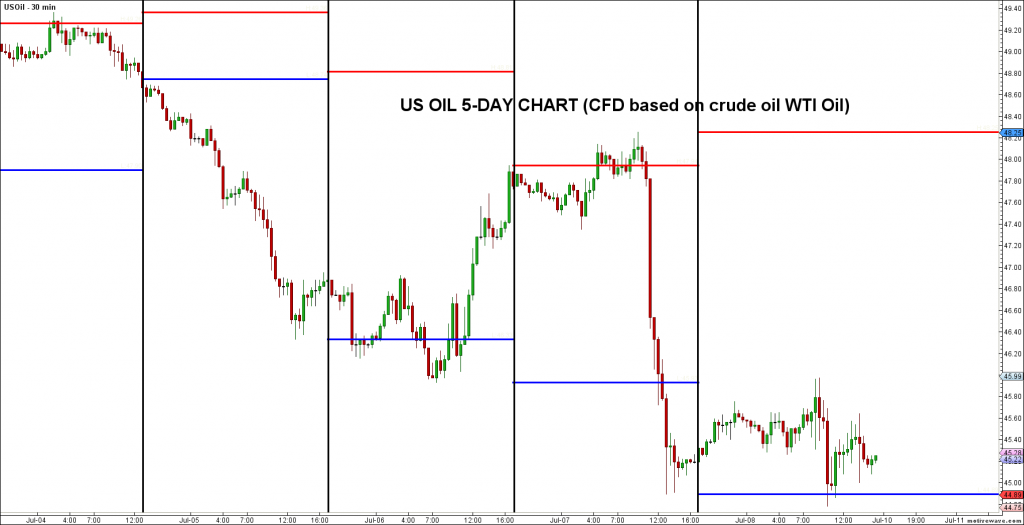 After a strong rally last week, equity prices declined early on due to possibilities that prices after the UK referendum may have accelerated too fast to the upside. Furthermore, investors remained cautious following statements from the Bank of England as there appears to be more worries of a global economic slowdown. Stocks continued to follow the price of oil for the majority of the week, but had a strong boost following the strong June NFP numbers. The S&P was trading at 2,104.6 prior to the announcement, and had rallied by about 26 points to close the week near its weekly highs at 2,130.2. 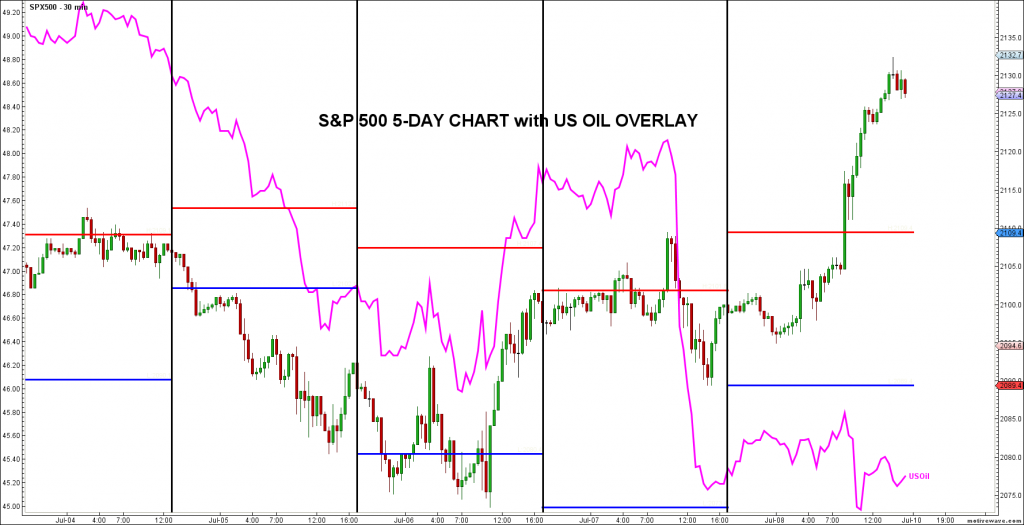 The price of gold rallied to its highest levels since 2014 this week due to continuing worries of the impact a Brexit will have on the global economy, and urging investors to safe haven assets. Furthermore, the selloff on Italian bonds as a result of political instability and concerns within its financial sectors are adding to more worries in Europe. 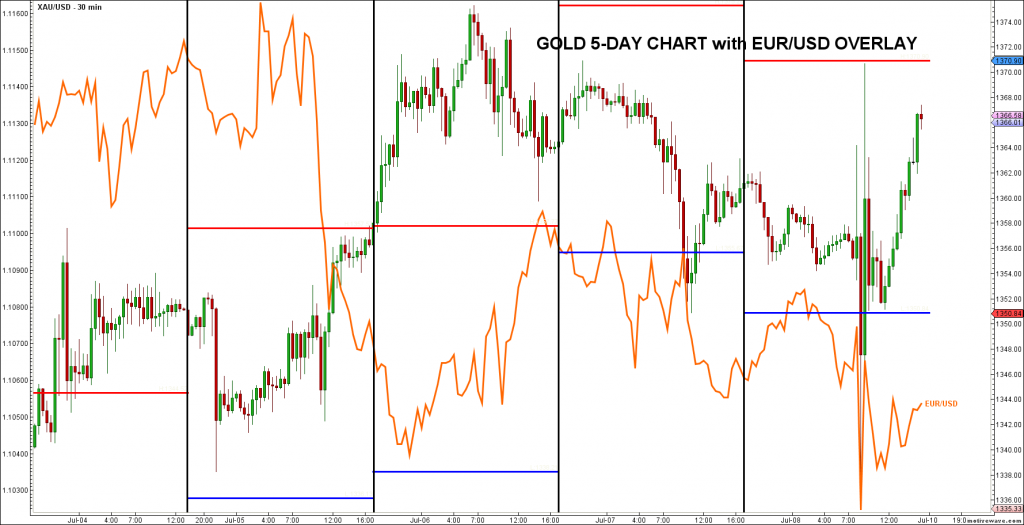