In this week’s video we do a complete Elliott Wave analysis of four markets – S&P, EUR/USD, OIL and GOLD. We also look at the changes that have occurred in the markets one month after BREXIT. Finally, we discuss the FOMC statement and the market reaction to the comments.

In the past Global Markets Analysis Webinars, we have followed the risk on/off stories by looking at oil, stocks, the EUR/USD (as a proxy for the dollar) and gold. Hence, we have looked at the market correlations to see the intermarket analysis playing out in these four asset classes. In the above breakdown post-BREXIT, all markets took their cues from Brexit, and went into risk-off mode simultaneously for 3 days, before risk-on came back into the markets. One month later, let’s see how the markets have evolved.

One month later, the S&P has made new highs, the EUR/USD is unchanged on the month, oil is $8 off the $50 highs, and Gold is holding its gains. In terms of risk on/off, the markets are mixed.

The market held tight into today’s FOMC statement. While the Federal Reserve left its benchmark interest rate unchanged on Wednesday, its economic assessment was more upbeat than last month after BREXIT, suggesting an increased chance of a rate hike by December. The key comment was “near-term risks to the economic outlook have diminished,” though the Fed is still watching global economic and financial developments, with an eye on inflation and growth in the US.

The reaction to the statement was interesting: in the first 5 minutes, the EUR/USD, Gold, the S&P and oil all sold off, but price action quickly reversed as shown in the chart below. 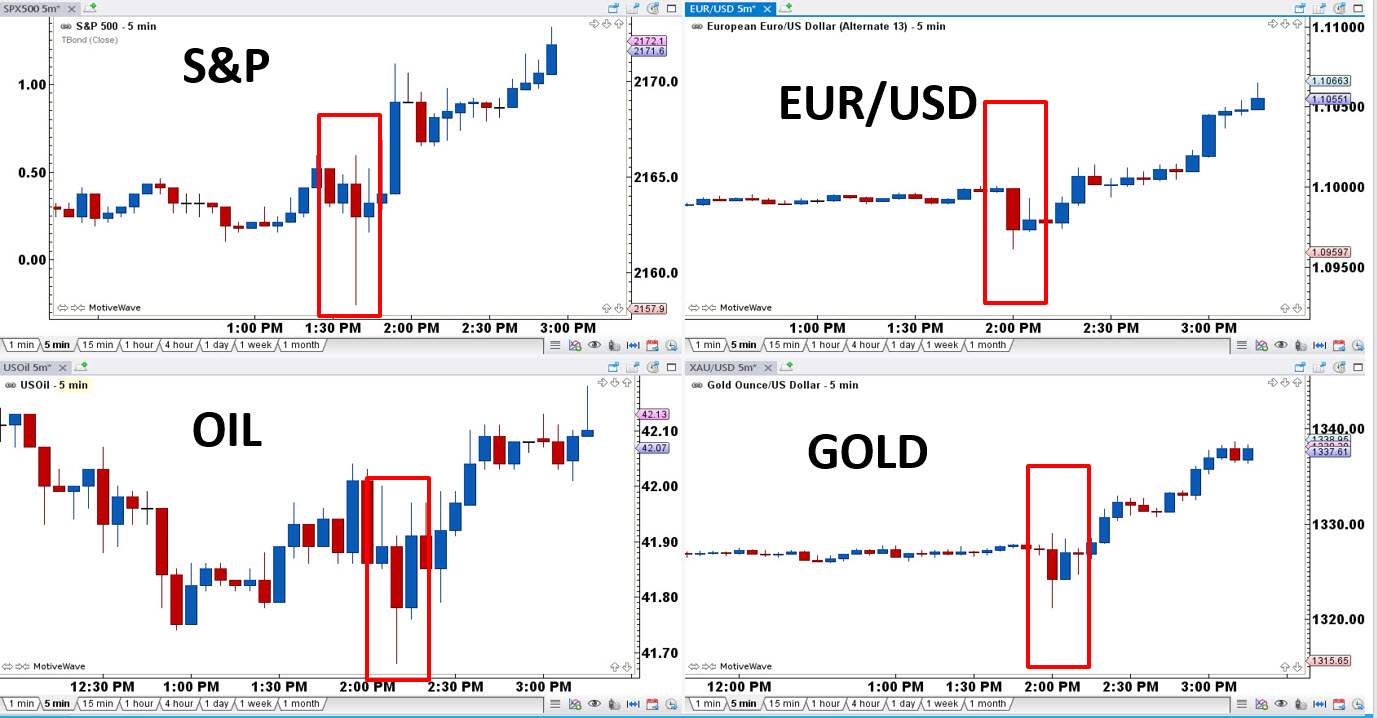 At the same time, Treasury yields rose and spiked higher initially but then fell. Similarly, Fed funds futures printed a 50% chance of a rate hike by December but settled near 38%, consistent with the reversal in all of these markets.

Why the sudden turnaround? My personal take is that the market is already thinking about US elections, and writing off an immediate rate hike. This could fuel Gold in the weeks to come, as the election brings more uncertainty to the US.

Until today’s FOMC statement, the EUR/USD had weakened to reach a three-week low after last week’s speech by Mario Draghi, stating that the ECB will look to add further stimulus this year once they are able to grasp the economic impact from Brexit. Draghi left rates unchanged at its first meeting since the UK referendum, causing yields on the German 10-year bunds to reach four-week highs.

Meanwhile, the Bank of England is expected to add stimulus at its next meeting on August 4th, after numerous surveys indicating a drop in business and consumer confidence. Furthermore, the latest PMI number for the month of June suggested that manufacturing and services in the UK has also contracted leading to speculation of a possible rate cut.

In other news, investors are now concerned regarding the financial situation in Italy given the massive amount of bad debt on the balance sheets of banks. The economic recovery has been relatively soft, and thus, reviving the financial sector in the current low inflationary environment is critical to ensure growth going forward. As the third largest economy in the EU, a banking crisis would surely cause a ripple effect amongst its trading partners, and thereby risk the stability of the Euro.

The Japanese economy continues to struggle as they look to battle through their current deflationary environment. Although trade data came in stronger than expectations for June, the numbers still showed a big contraction due to sluggish global demand. Exports dropped for the ninth straight month by declining 7.4% y-o-y while imports slipped 18.8% – the 18th straight month of declines. Investors are expecting the Bank of Japan to also expand on their monetary policy stimulus plans due to slow global growth and a rising Yen affecting the country’s exports.

For an in-depth Elliott Wave Analysis of the EUR/USD, S&P, Oil and Gold, please watch the attached video. For daily market analysis, please check out elliottwavedesk.com.