By Jody Samuels and Juan Maldonado

EUR/USD was trading at 1.1243 at the time of this article. The EUR/USD subsequently broke down at the time of the posting. Prior to breaking down, prices had been trading sideways, bouncing in a tight range of roughly 85 pips from the support area of 1.1200 to its resistance at 1.1285. The Average True Range indicator which takes into account the past 100 daily sessions, shows an average of 84 pips movement for each session. As a result, a week where the price has not reached its 100 day ATR means that the market is trapped in an area of congestion and is at a stage of indecision. Trading this pair would be ideal once prices either break out above the resistance of 1.1285, or break down below the support at 1.1200. In the case of current price action, prices broke below 1.1200. Now let’s take a look at the scenario using Elliott Waves to illustrate the roadmap based on our view for the next week.

Our main Elliott Wave count still remains valid, which is another test of the highs at 1.1366 to complete red circled B, which you can see on the chart. With that said, the price action in recent weeks has shown that all of the moves since the high of 1.1366 on August 18th have been in 3-wave patterns. Three waves in Elliott Wave terminology indicate “corrective”. This move down, upon the break of support at 1.1200, should continue until it completes its 3rd leg which started at 1.1285 on September 15th. The green label “WXY” signifies this 3-wave move. In order for the Wave Y orange of B red to continue to remain valid, we would like to see this move down end in 3 waves, rather than 5 waves. (A 5-wave move could indicate a change in trend.)

We recommend keeping a conservative approach towards this pair due to the volatile environment making it more difficult to find high probability trades. Follow these wave counts this week and next, when we will update the EUR/USD again! Have a great trading week and remember that there is a lot of important news out so stay alert! 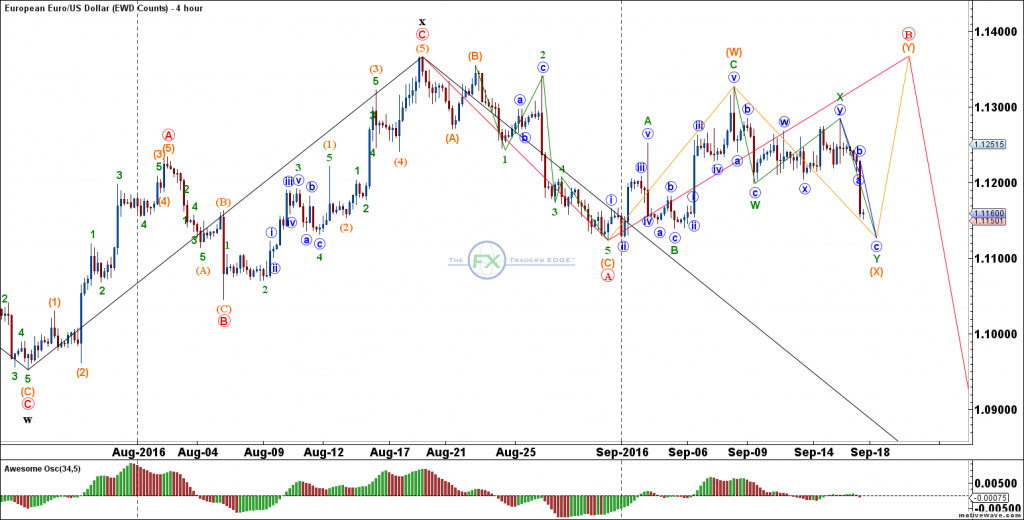