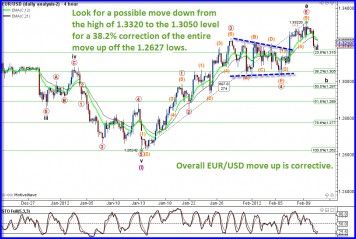 EUR/USD: Over the last week, the EUR/USD traded north from a low of 1.3027 on Monday, February 6th to a high of 1.3320 on Thursday, February 9th. This occurred after the noted sideways consolidation that looked very much like a triangle continuation pattern, resolved itself in a thrust out of the triangle in the direction of the current trend which was up.This thrust out of the triangle fell short of the 1.3350 to 1.3400 target by 30 pips but the direction was right. On the fundamental side of things, the unpredictable Greek situation in light of a few upcoming austerity measure votes, should have caused risk markets to continue to gain momentum. In fact, the markets have lost momentum as illustrated by Friday’s selloff in stocks and the EUR/USD. Friday could have been position squaring ahead of the weekend or a reversal in risk trends. We don’t know yet but this week should be interesting. We have changed the count slightly on the charts to one where we see a correction from this level which could be followed by another move higher. That depends on how the move down plays out, and whether it is corrective in nature or impulsive. It also depends on how the market digests the Greek news this week which will affect the EUR/USD. For initial support, we will look towards the previous 4th wave in the vicinity of 1.3050, which is also 38.2% of the last swing move higher from 1.2627 to 1.3320. From current levels, look for a corrective move up without going above 1.3320 for a potential sell. Stops have to be placed above the highs at 1.3320. Once we hit the 1.3050 level, it remains to be seen if we break below 1.3000 followed by 1.2930 and 1.2880 or trade higher once again. A move above 1.3320 will see higher levels. Watch support and resistance levels, including Fibonacci and Pivot Points.