The miss in Non Farms was the catalyst that sent stock indices up in corrective moves taking back some of the 2014 losses to date. The S&P completed a five wave move when it hit the 1737 on Wednesday and retraced up just past the 50% to close at 1797. The move up so far is impulsive like and can be counted as a complete five wave A of a zigzag correction. The Awesome is diverging at the current price which sets the stage for the S&P to move down in a B wave to the ideal target of 1760—the 61.8% of the move up from Wednesday’s low. From there the industrials should move up to finish the corrective zigzag structure somewhere around the 1817 area. The S&P should move down in a wave C of a larger minor degree correction or a wave three of the first leg of a primary wave C correction down to lows below the Jan 2009 low. If the recent move up proves to be an impulsive wave up to new highs, it does not change the trading map much in terms of the short term movements. The risk is down on both counts. 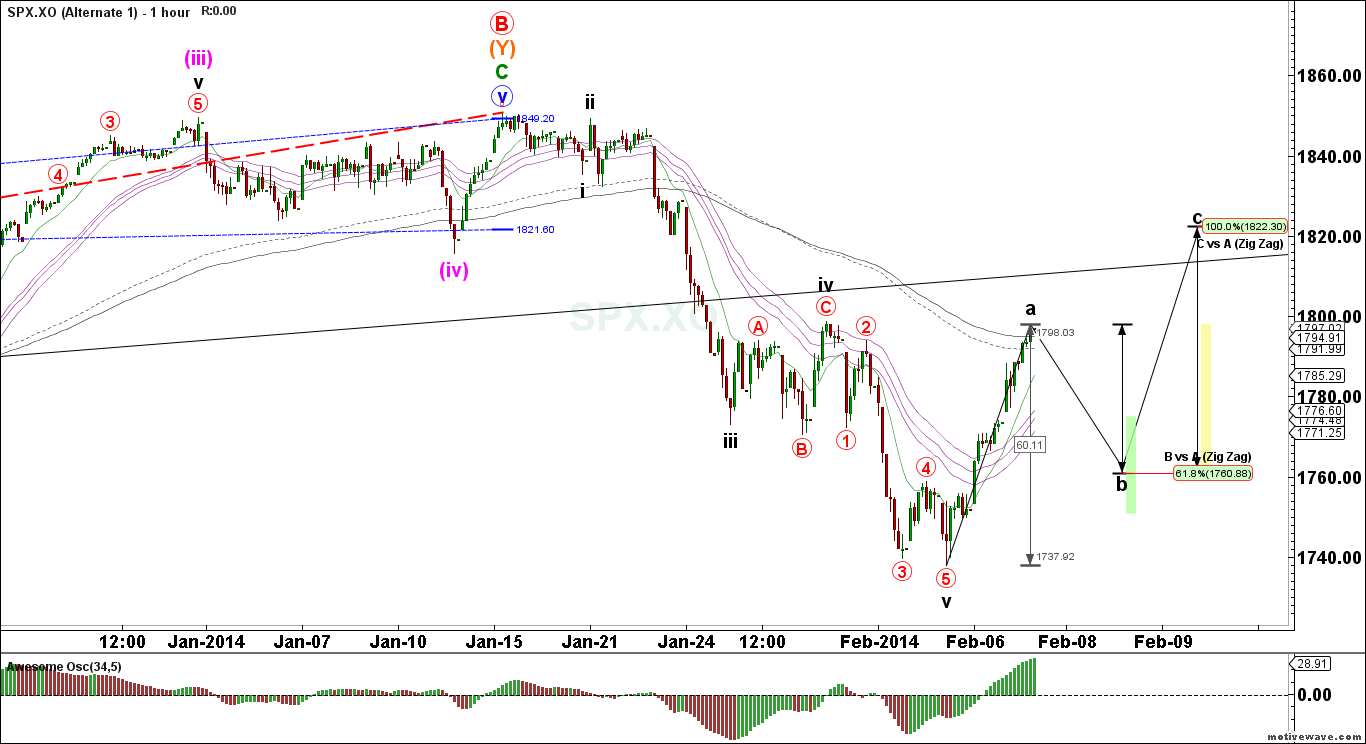 Likewise, the move down on the Dow from the Dec 13th high to the 15340 on Wednesday can also be counted as a completed impulse wave with a similar S&P impulsive move up in what also appears to be an A wave of a larger three wave move correction to the 15976. Similar short term moves can be found on both the NAS and Transportation. US stocks are ripe for 2% drops before they correct up to ideal Fibonacci price levels. If price moves up next week past the 78.6 and 88.6% Fib retracement levels, then waves will have to be extended to adjust to higher price levels. 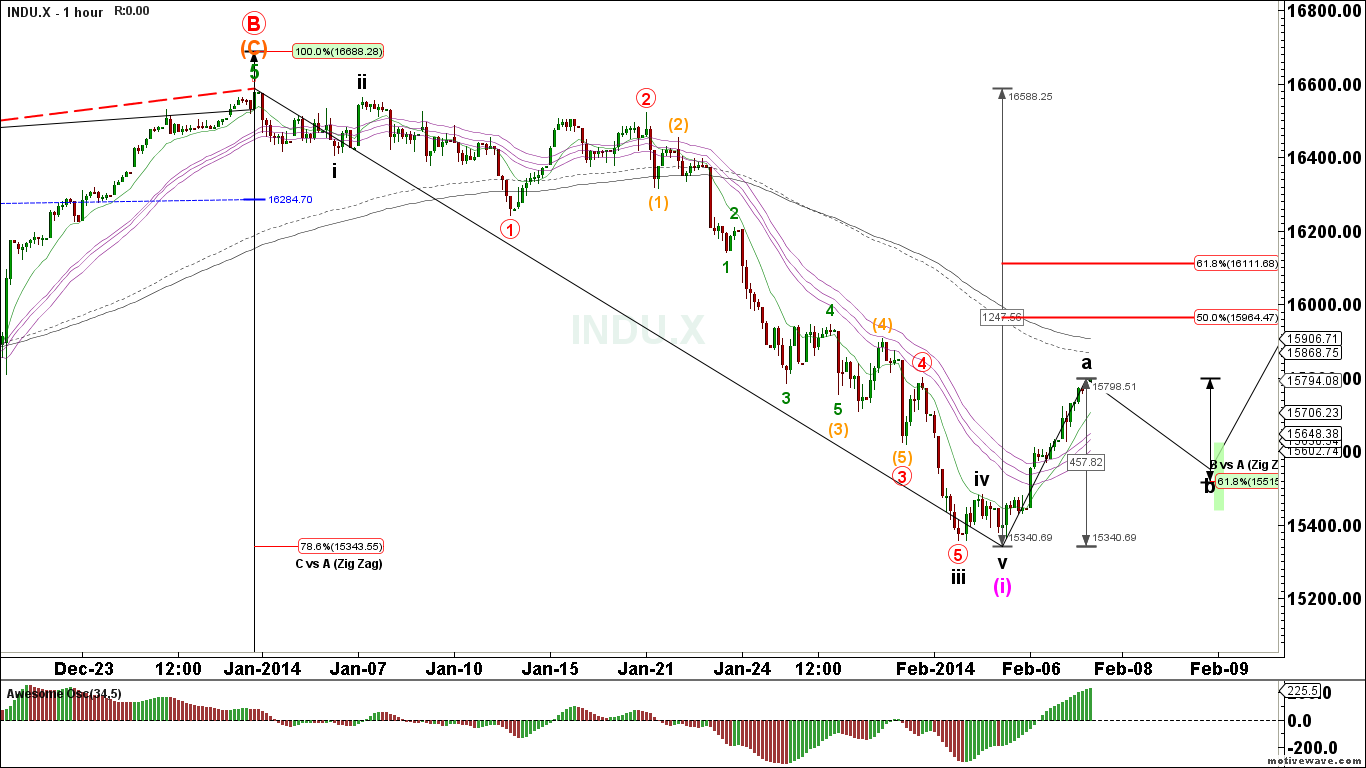 The US Dollar index moved up from the Jan 24 80.15 in a five wave impulsive move, yet failed to take out the 81.38 resistance level before yielding to a three wave corrective move that took it to the 80.59 early Friday. Regardless of the Dollar’s struggle lately, the long term view is still bullish. The bucks seems to be building up pressure in a 1- 2-1-2 sequences to the upside. This can be seen on the EUR/USD which can also be counted so far as a 1-2-1-2 sequence off of the Dec 27th high. The move up on the EUR/USD is a complex correction which is just short of some very stiff Fibonacci convergence and trend line resistance. Price could move down from current levels; however, I would look for price to test the 1.3661-1.3688 area just under the Nov 7th-Jan 8th trend line resistance before price breaks down to as low as the 1.25.

The Pound’s rally Friday proves to be corrective. The forth waves is now at heavy Fibonacci convergence and could move up a bit more to the 1.6463 before breaking down in a wave five to the 1.6218 of either an A or wave 1 of a larger move down. Price got as high as the 1.6420 before pulling back bit of the tunnel to close at 1.6408 Friday. Corrective targets have been hit leaving the pound to downward pressure this coming week.

Even though the Yen moved up on the buck this past week, the longer term picture remains bearish for USD/JPY. The move up from the Feb 3rd low is corrective and minimum targets have been hit. Dollar/Yen is completing a zigzag wave 4 of a larger third wave (red circle three). Wave five should be on it way now with Fibonacci target around 100.15. I have seen some prominent technical analysts who are optimistic about the Stock market and Yen negative. This is a view I find hard to accept for the Yen looks strong against all the majors on the longer time settings. Even if stocks make new highs on their Primary B wave corrections, they are still due for a multi month correction down which correlates with EUR/JPY and USD/JPY weakness.

The CAD and the NZD moved up against the Buck this past week, however, look to weaken some this coming week. USD/CAD looks to move up to the 1.1335 area in a wave five of three. The NZD/USD should pull back from its move up from the Feb 4th .8050 low in a B wave correction. The NZD has been trading sideways since July of last year. However, the trend on the longer time frames is still bearish.

The USD/AUD has moved up as expected. This appears to be a wave four correction which still has room to the upside. The Aussie looks strong against all the majors for the next couple of months including the Yen. The move up last week on the Yen took out the 90.95. If the AUD/JPY takes out the 94.47 the pair should have no problem heading up to the 98.50 area in a C of a B wave correction. However if the AUD/JPY moves down past the 88.20, then a one 1-2-1-2 series will have completed and the pair should head down to complete a wave two of a larger 1-2 series. 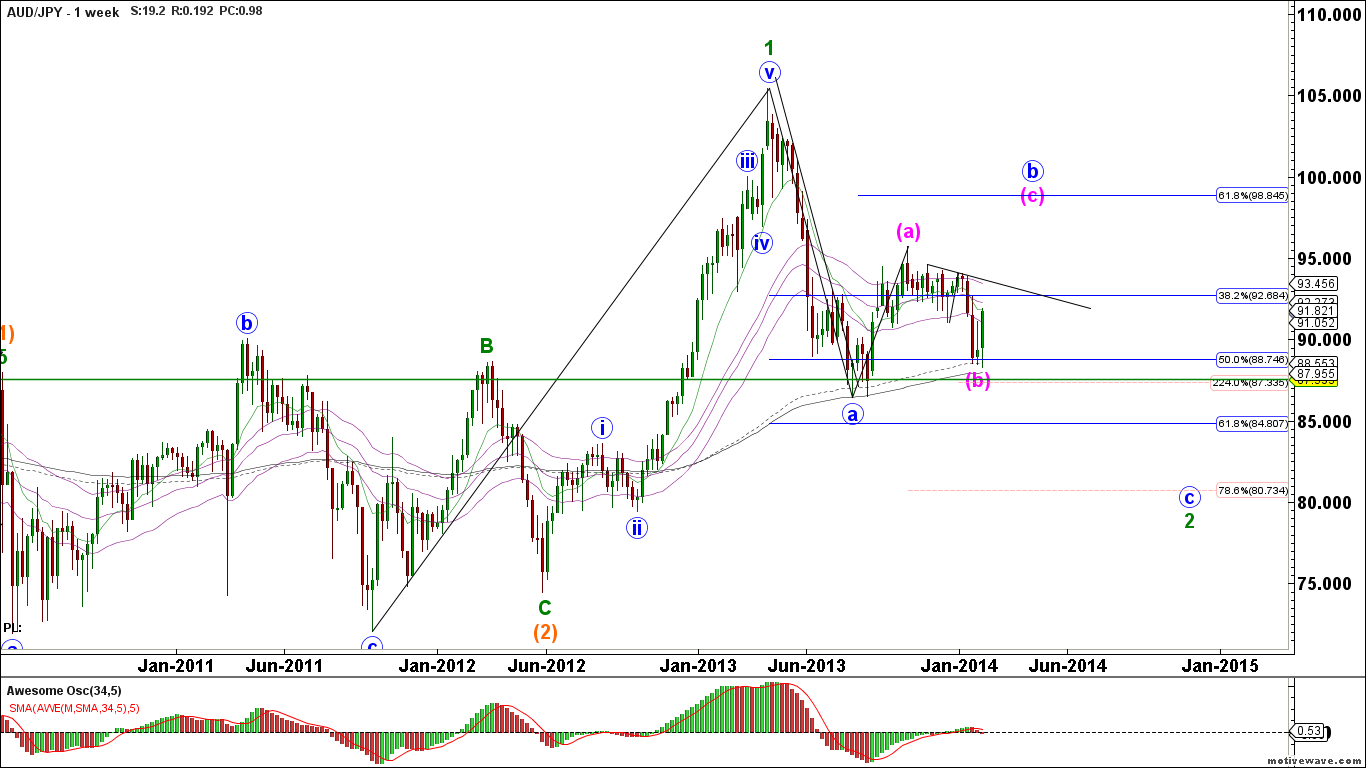 The US 10 Year Yield moved up this week to the 2.72 after completing a five wave move at 2.57 near term low. It pulled back 7 basis points and then moved up and closed at the 2.67%. The move up from Monday’s 2.57 low should be a wave 1 of a C wave of an expanding flat correction. At this point it does not matter which of the three possible counts you chose. The move on all three is for Yields to fall after this correction.

Gold and silver both moved up above their upper channel line resistance this past week. The metals should now extend their corrective moves up. Gold could move as far at the 1400 before breaking down again. The move up from Dec 30th test of 1180 has been a bit choppy but should turn out to be a one of a C wave correction. Keep in mind that there is an alternate count that has both metals in a possible triangle forth wave. If they are then they would be in C waves which tend to be choppier and are stretched out time wise. But regardless of the counts, with the break above the upper tend line resistance, the metals are now poised for higher ground. However, since both metals are in the middle of corrections at minuette degree, it would be wise to risk shorter type trades while preserving capital. For example, take the silver chart below, there is strong Fibonacci convergence at the tunnel. Look for a bounce of this formidable resistance but keep it tight to just 38.2% of the move up from the Jan 30th 19.02 low. There is still plenty of room up for both metals to correct. 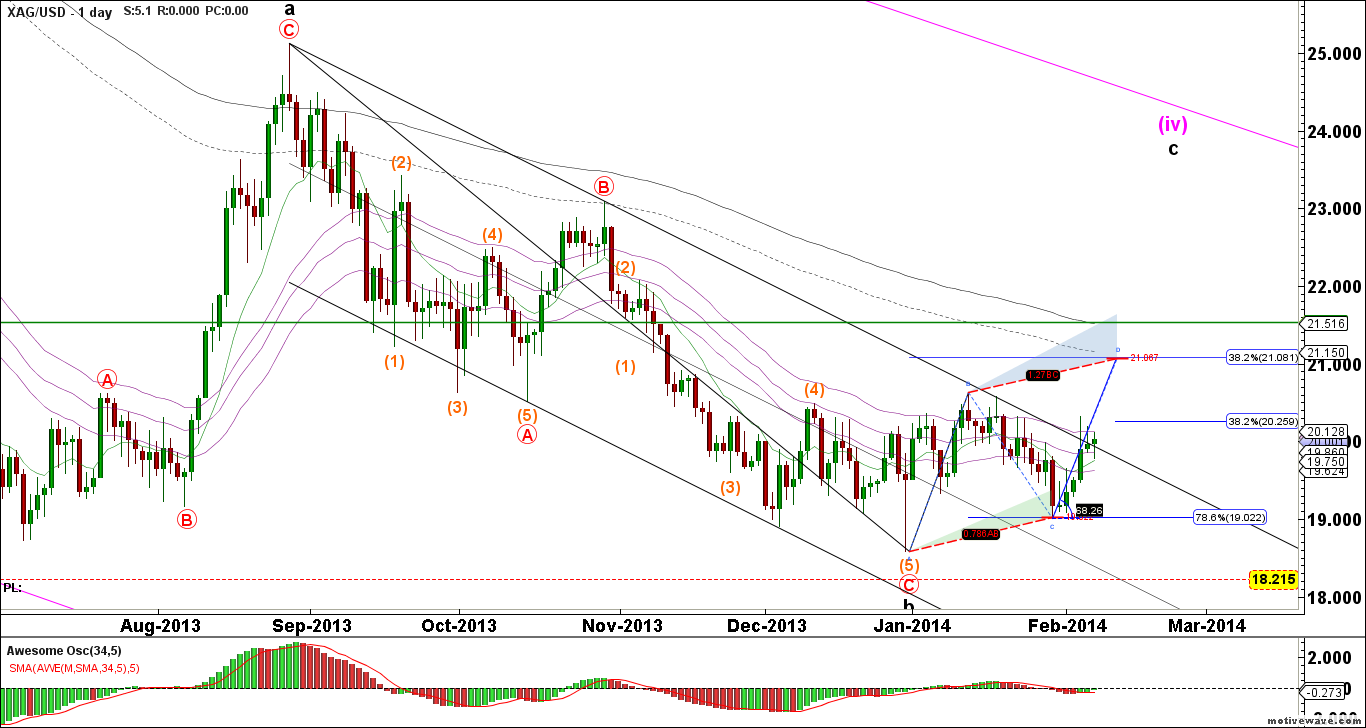