Monthly
This pair has been doing some interesting moves lately. But not if we look at the monthly chart. It’s in a sideways correction in this TF. The bungee is telling me we still have some room for some bullish pips here. I’ll make my case for what may be a small move further up on the lower TF’s.

Overall I believe we’ll see the monthly drop. But not before we hit some targets at a higher price. Notice the BAT pattern completion. The consolidation is happening right at point D. Of course buying the Euro based upon a BAT completing on the monthly is… well it’s for the position traders. That being said, I wouldn’t buy at this point on this TF. There is no divergence so we need a lower low first. I am merely pointing out this BAT pattern, in this case, as a reason for the range we’re in. 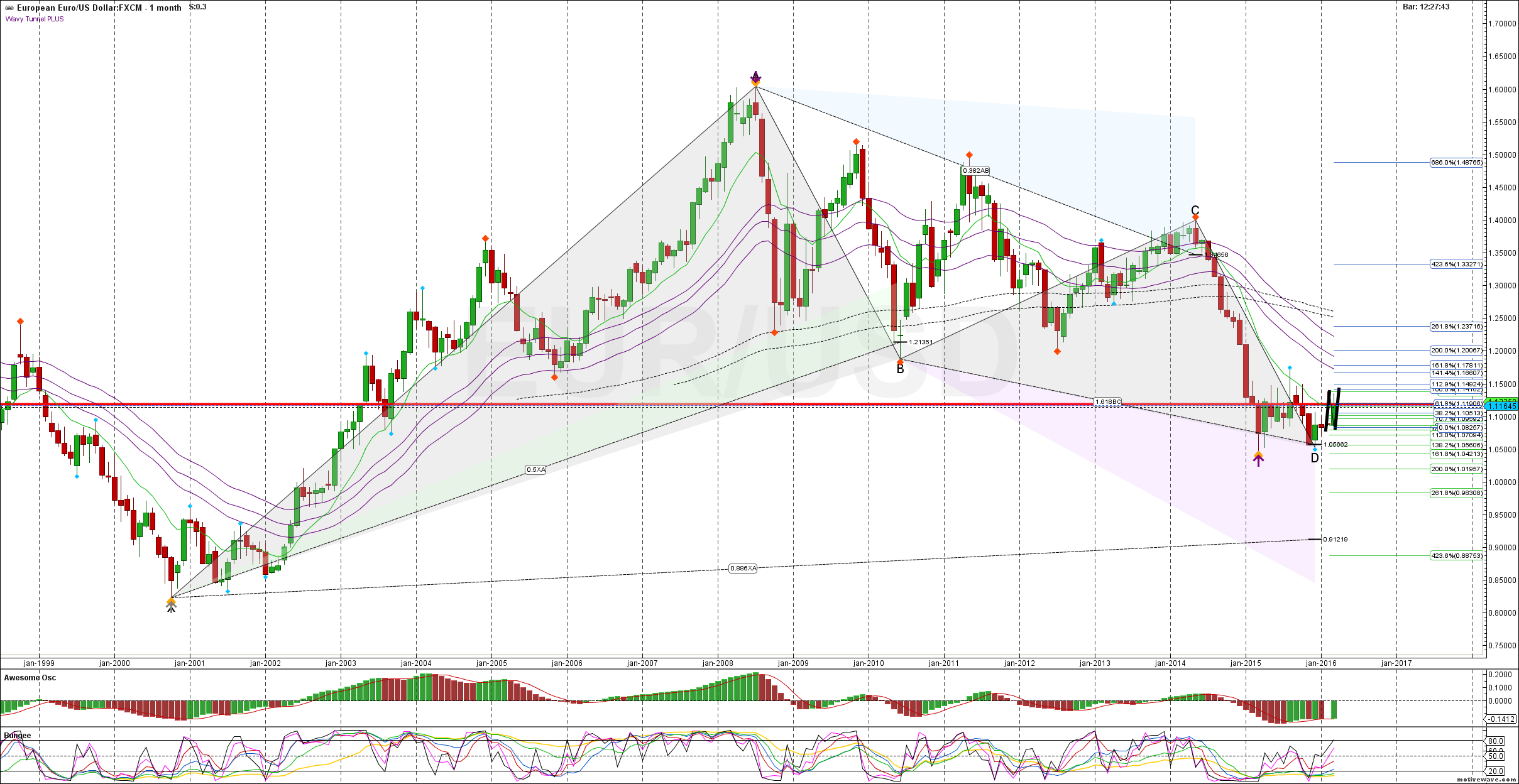 Weekly
What catches my eye here is the missing yellow semaphore. This adds to my suspicion of a bullish move. We don’t necessarily need to reach a price as high as 1.20 in order to get one. Again, the bungee looks like it might want to paint a yellow semaphore. The weekly is not telling me all that much at this point. But let’s say there is some bullish sentiment… even if it is only for a “few” pips. 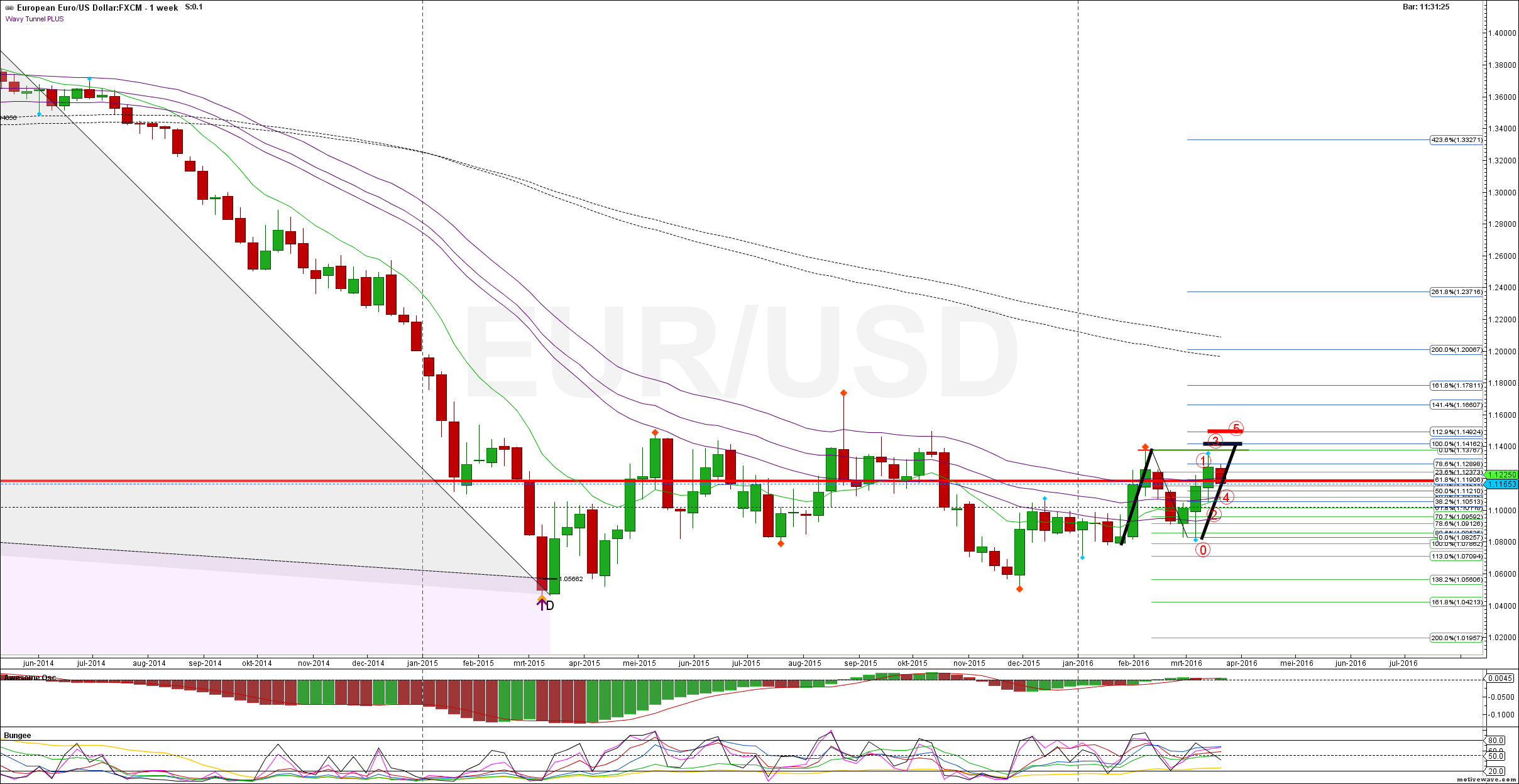 Daily
As far as I am concerned, the daily is the most interesting TF for this pair at this time. I really believe chances are pretty high that we’ll see 1.1376 being surpassed (previous high on Feb. 11th). That would also give us divergence.

The bungee is agreeing with this so far. The slower strands are staying around the upper reversal zone while the faster ones are stretching away. For those of you in Jody’s course, you’ll understand that chances are price will not continue this bearish leg for much longer.

Mario Draghi made the EURUSD do all kinds of things on March 10th. Especially on the lower TF’s. I am mentioning this because it makes the Elliott Wave count a bit less clear with that long wick.

But what if this last corrective leg is a wave 4 and we need a wave 5 in order to complete the impulsive sequence? That would be in line with breaking 1.1376, wouldn’t it? Notice also how price has reached a relevant support and resistance zone. And for those of you who like to use fractals on the charts; price is at a previous bull fractal. In Wavy Tunnel terms, price is at the filter and seems to be finding support. I am not saying price will not go below the red line I drew. The red line is there as an indication of that S&R zone. (Look left, you’ll see the relevance). 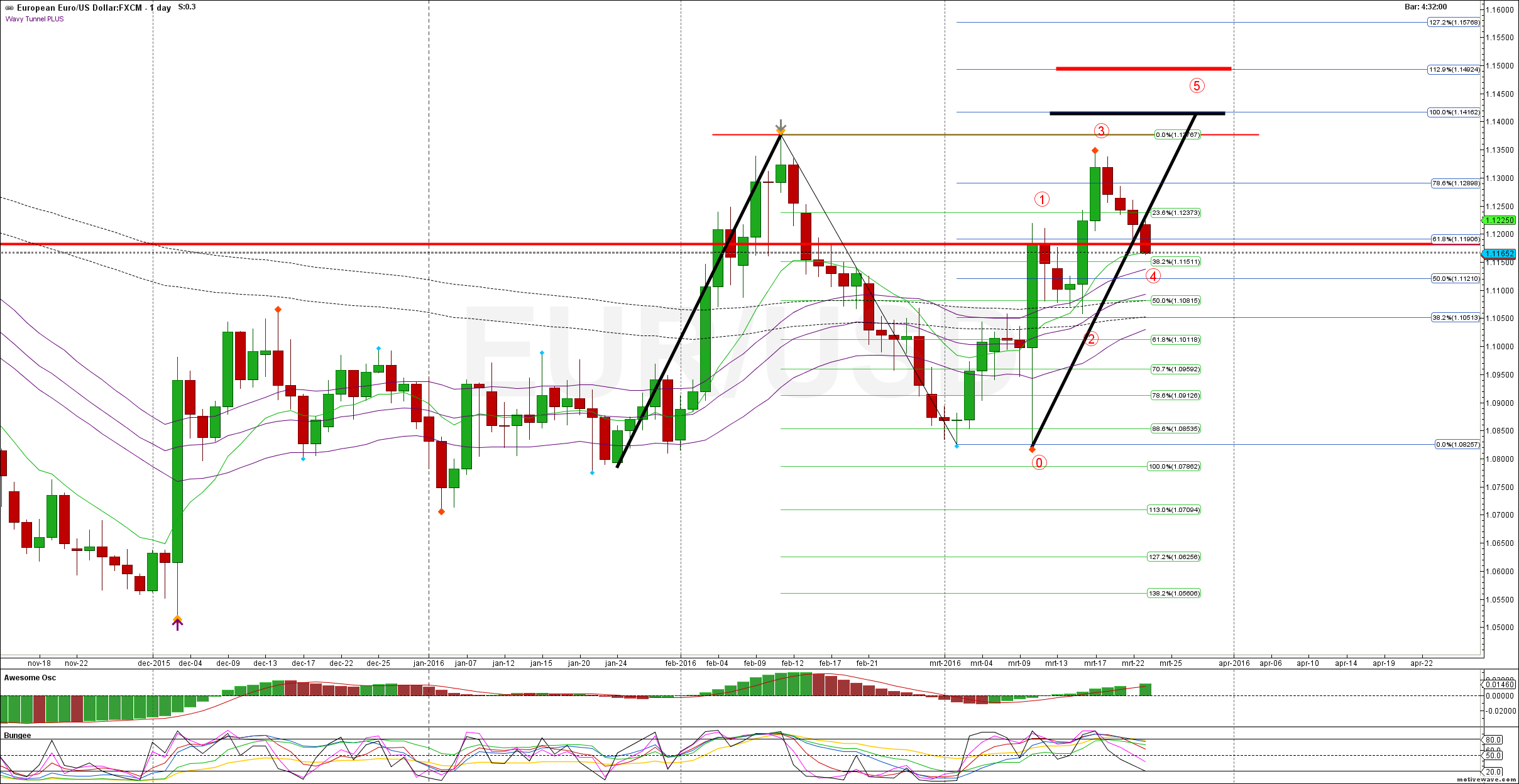 For the harmonic traders amongst you: the black pattern is an AB=CD that might complete by doing everything I said above. If price reaches this potential reversal zone between 1.1416 and 1.1492 we might be in a good place the sell the EURUSD. 1.1416 in this case is the BC extension.

All this being said about the expectancy of a bullish move before reversing is based on what I see in relation to the wave, tunnel, AO and bungee. I do not know if price will do what I expect. I always trade what I see and what I see using the Wavy Tunnel is a missing leg upward.

4H
I am far from an expert when it comes to Elliott Wave but I see an ending diagonal in need for a wave 5. The bungee looks like it is agreeing with this also. There is no divergence on the AO… yet. If we would go for wave 5 we’d have divergence indeed. 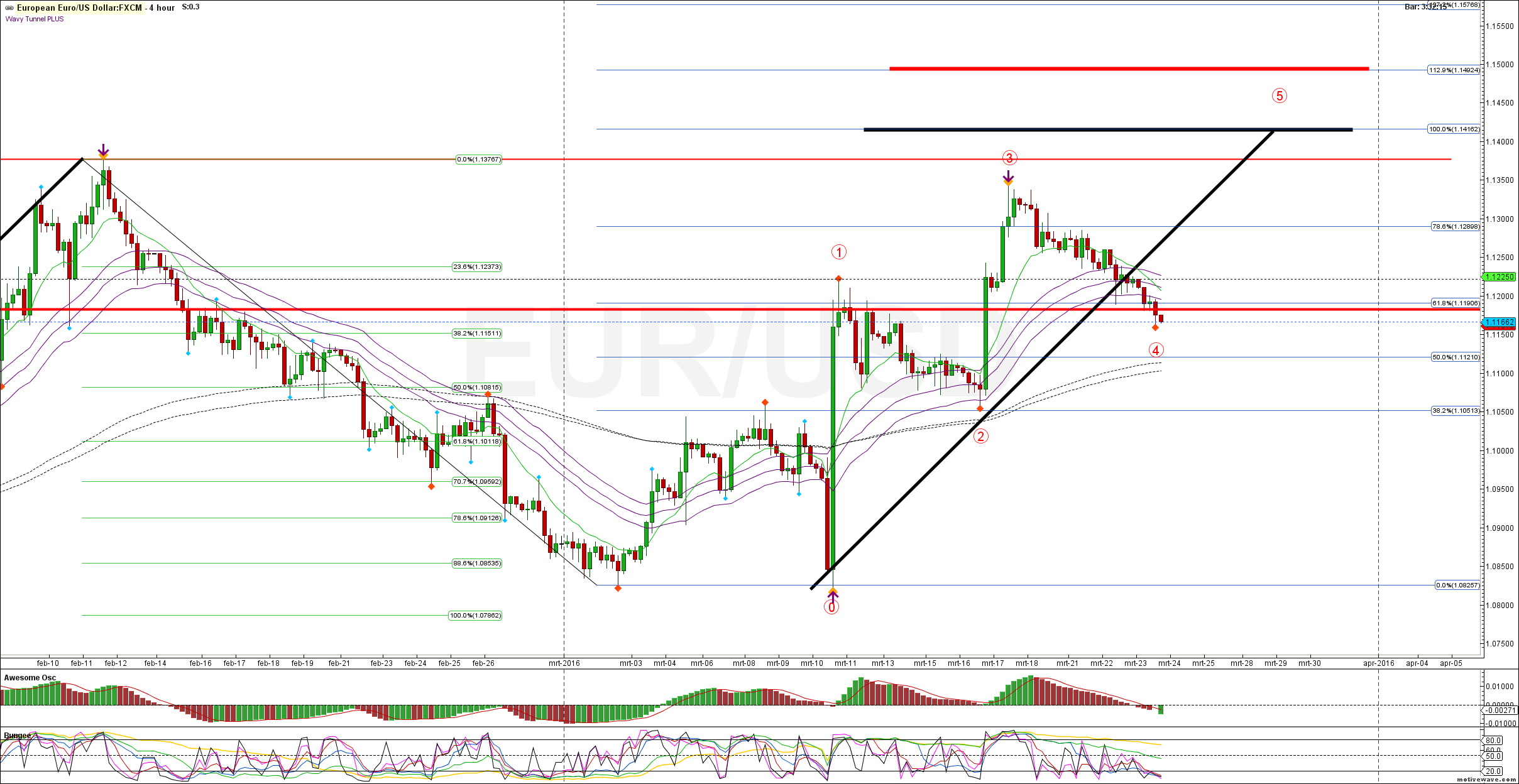 1H
The AO is “starting” to show bar divergence. Are we seeing the first signs of a possible reversal for the start of the leg up to 1.1376? 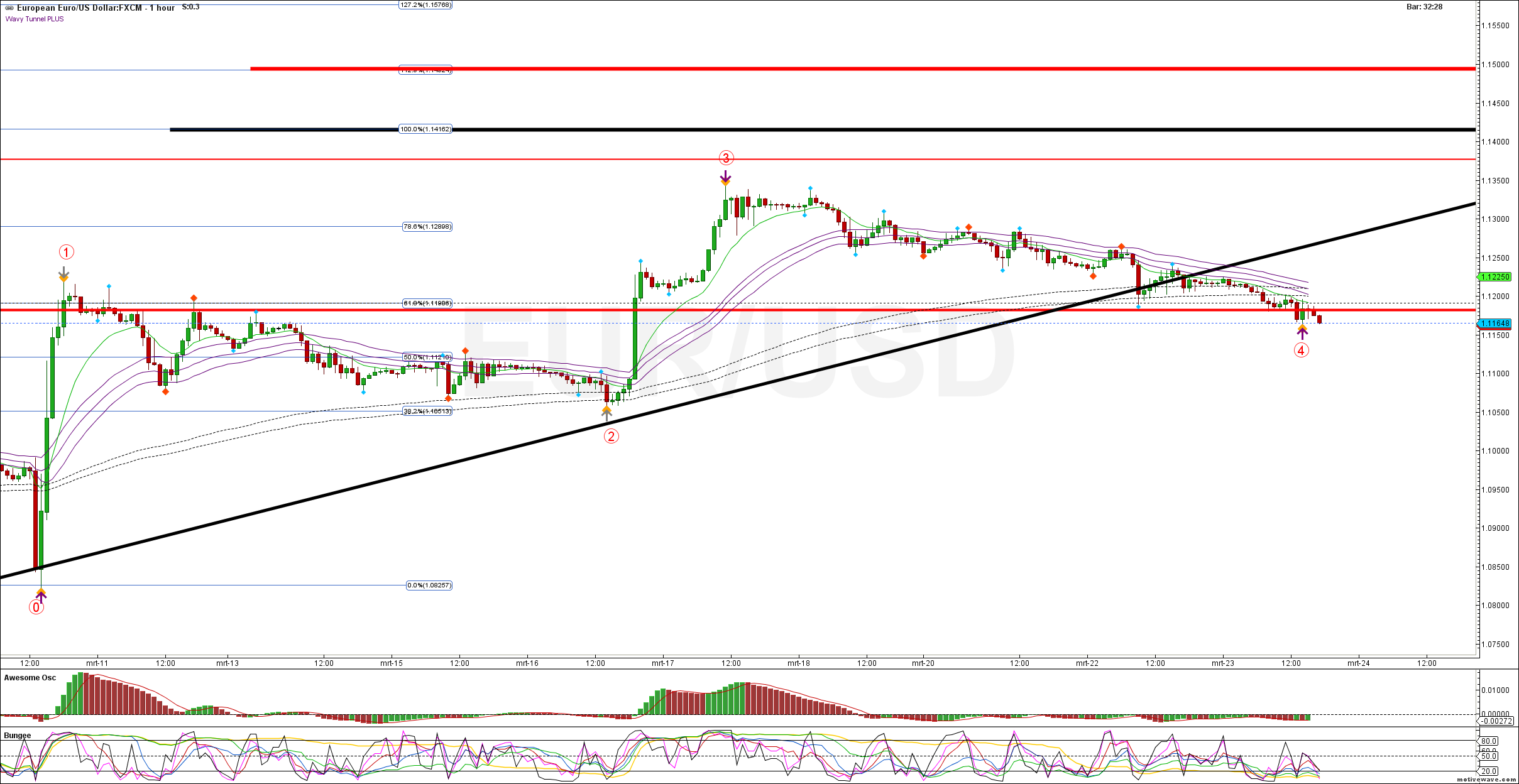 15M
Same on the 15M chart. Bar divergence on the AO and the bungee is squeezing. If price makes a new low, we’d have triple divergence. 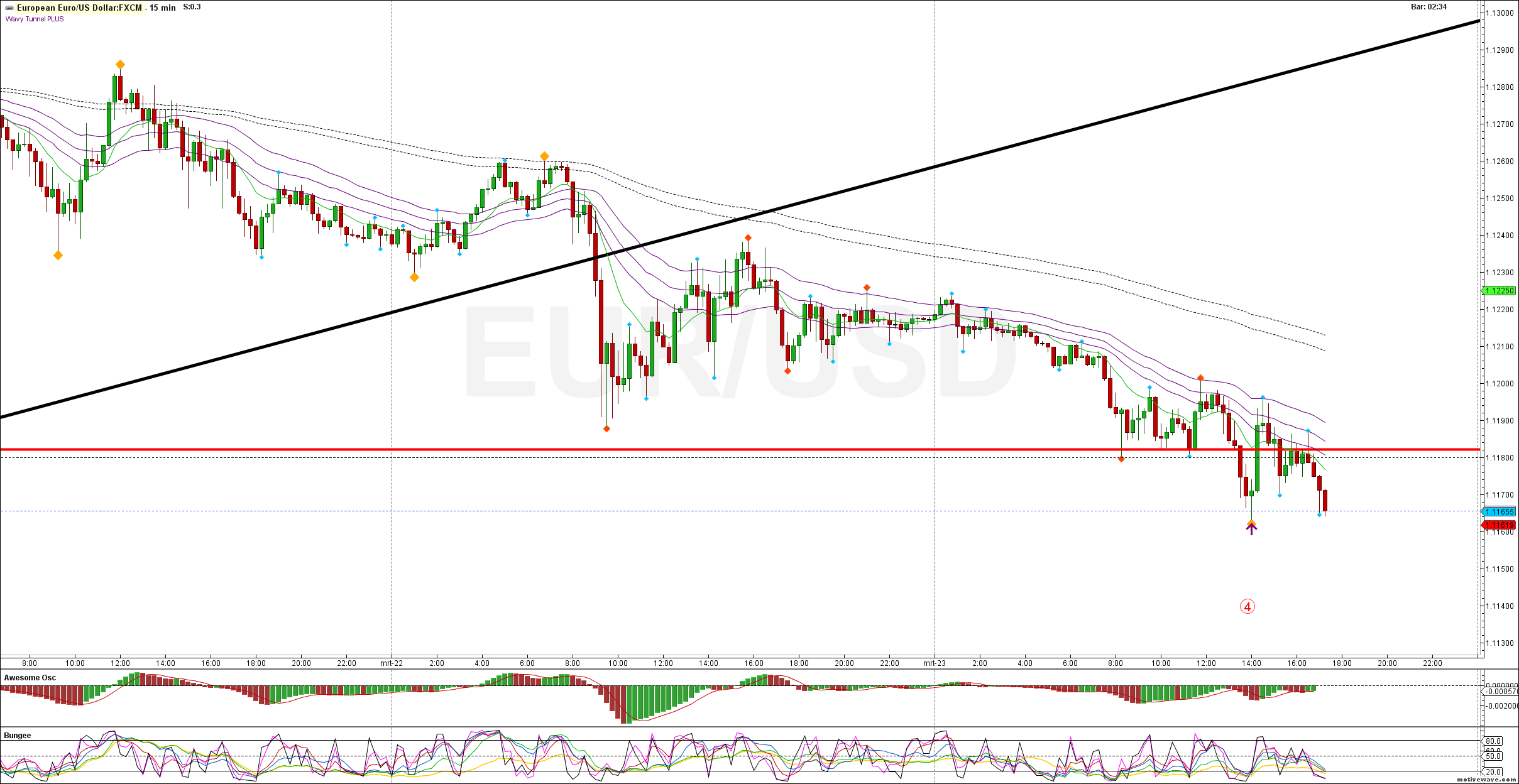