Last week started with retail sales missing big. Housing numbers came out looking good for multi-family units however weak for single family units which are the ones that drive the economy. Inflation numbers ticked up as anticipated and Yellen also came in as expected reasserting rates were going up this year if the economy progressed as expected. CPI YoY moved up from 0 to the consensus .1. The core also ticked up from 1.7% to consensus 1.8%. Take note that the recent drop in oil should be weighing on the FED when considering these inflation prints. In the end stocks the buck and bonds were bid up while gold and oil ran red for the week breaking down through key support. And, even though the NAS made it to new highs, its peers did not follow through. However, Dow Utilities and Trans have completed three wave corrective like series from their respective highs and have since move up impulsively and look to carry up further. How high they will get i don’t know but I am willing to venture saying not far for this run up is weak.

The SPX, although not making it to new high has retraced just about 88.7% of the drop from its all-time high and it too looks like it is going to carry to new highs. Looking at the SPX, if this move makes it above the 2138 Blue 2 invalidation, Orange 4 will be capped at the 2043 as you see in the chart making the move from the 2119 February 2015 high a counter trend complex corrective. The impulsive series up should reach the 2180 where I feel the index will fail. If this 5th wave run up is commensurate with the first wave up from the 1074 Oct 2011 low, the 61.8% 5vs.1 is at the 2178 just below the 2180. 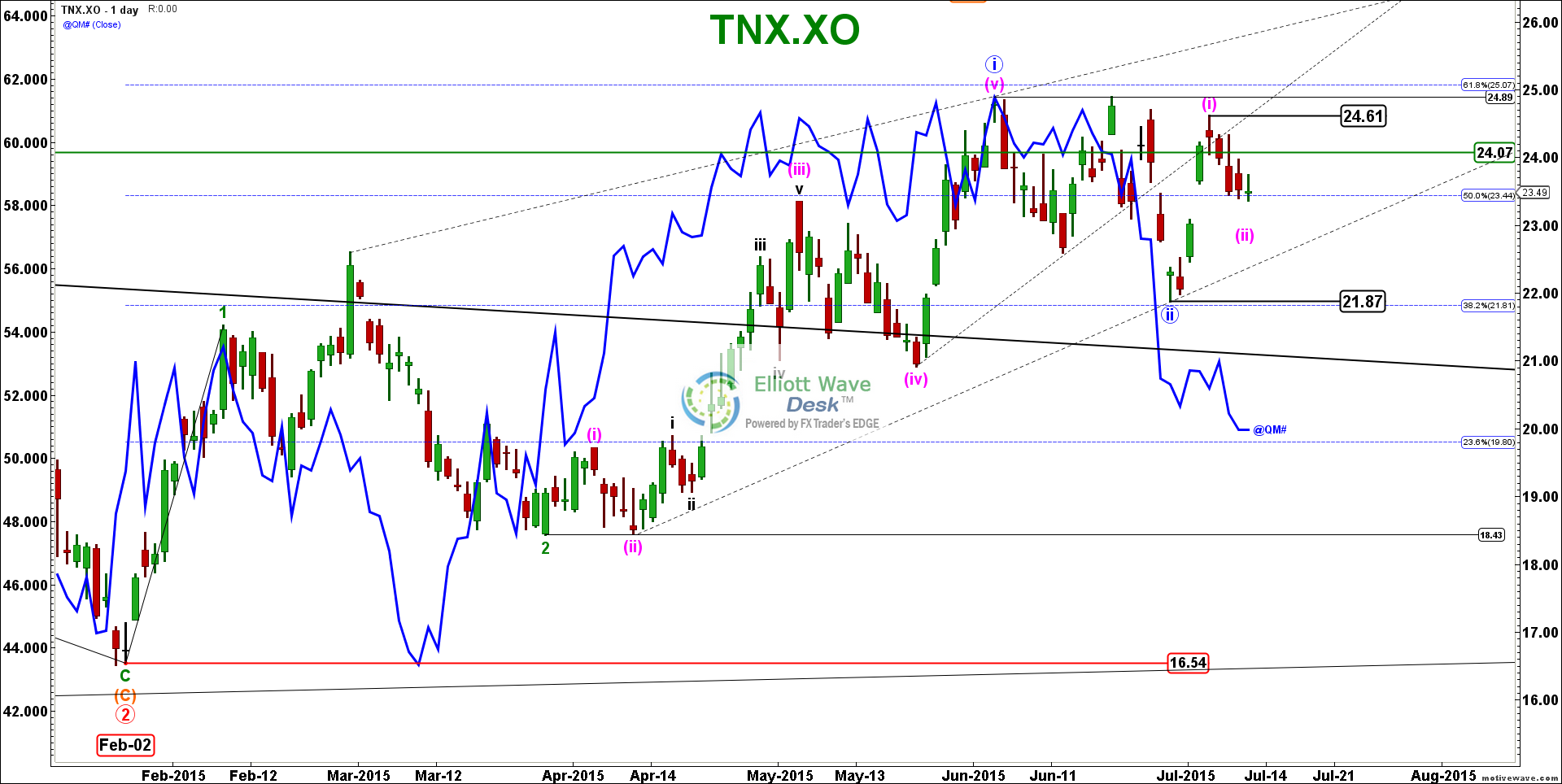 It looks like rates are running with oil and if they do both fall, it could give the indexes the boost they need to make it to new highs. Rates and oil usually trend together but look to be diverging as of last week. The move down from the 62 high is very impulse and should be only part of the fifth wave the index is most likely in. The move is supposed to carry price down the low 30s. The US 10 year could bounce around the low 2s for a bit as oil finds a bottom. It does look like it is going to take a run up in oil and rates to bring down the Stock market.

Meanwhile, Crude after dropping down through the 50.58 could still make it up to test the 53.85 in a C wave of a flat the commodity just might be carving out. Price is now testing the drop though trend line up from the 50.58 Black 3 low. Price should carry up in five waves. If the move up takes the form of a three and stops short of the 52.85, I will then be tracking a triangle of which the commodity will be in a D wave then.

Gold sold off after the FED’s hawk talk and is now testing the 1130 low. I have this impulsive series counted from the 1232 May high.1167 for now. Once the move develops I will adjust counts. As of now, it looks like price is in a 3rd wave decline which should be ending soon. This move down out of the nasty contraction zone the index had been in for well over a year has the potential to make it down to the 1040.

The Dollar index has made it above the 97.75 May high invalidating the triangle for a larger one I now have labeled in the chart. This new B wave could complete at either of the 4 resistance zones in Red and Magenta. The 98.25 is the 100% expansion of the Blue WX swing. The 99 and 99.50 and 100 are all stiff FRZs which all should reject price if tested. One should push price back down to the 94 area for a Green C wave.