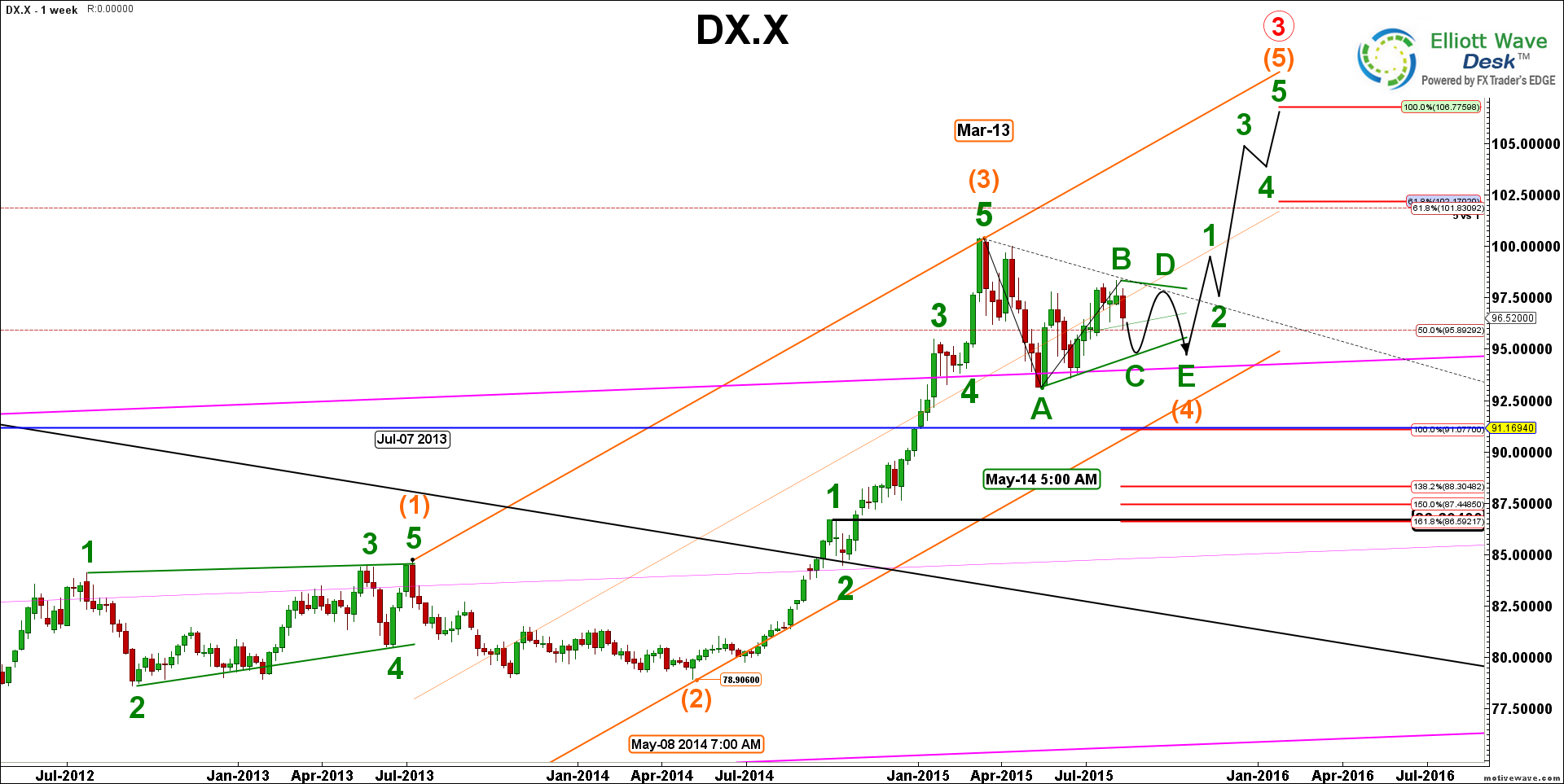 This week the data was mixed. Wednesday JOLTS Job Openings (Jun) missed consensus by 51K. Monthly Budget Statement (Jul) also missed -149.2B vs. the -132.0B expected. The dollar fell hard. The next day Retail Sales ex Autos missed the expected .5% at .4%. Import, Export Price Indexes all hailed falling prices. Retail Sales beat consensus however, printing .6 vs. the .5 expected. The buck stabilized from its 3rd wave drop off the 97.33 high. Friday inflation numbers came in painting a different picture from Wednesday’s Import Export Indexes. Prices firmed across the board. Industrial production also came in supporting a rate hike beating expectations by .3% coming in at .6% vs. the .3% expected. Net, the buck lost on the week falling off a B wave counter corrective move at the 98.33 Aug 7th high. This C wave could either be of a triangle or a Zigzag. If a zigzag then the index should make its way down to the 95.46 given the wave structure down so far from the Aug 7th high. A triangle C wave should find support at the 95. 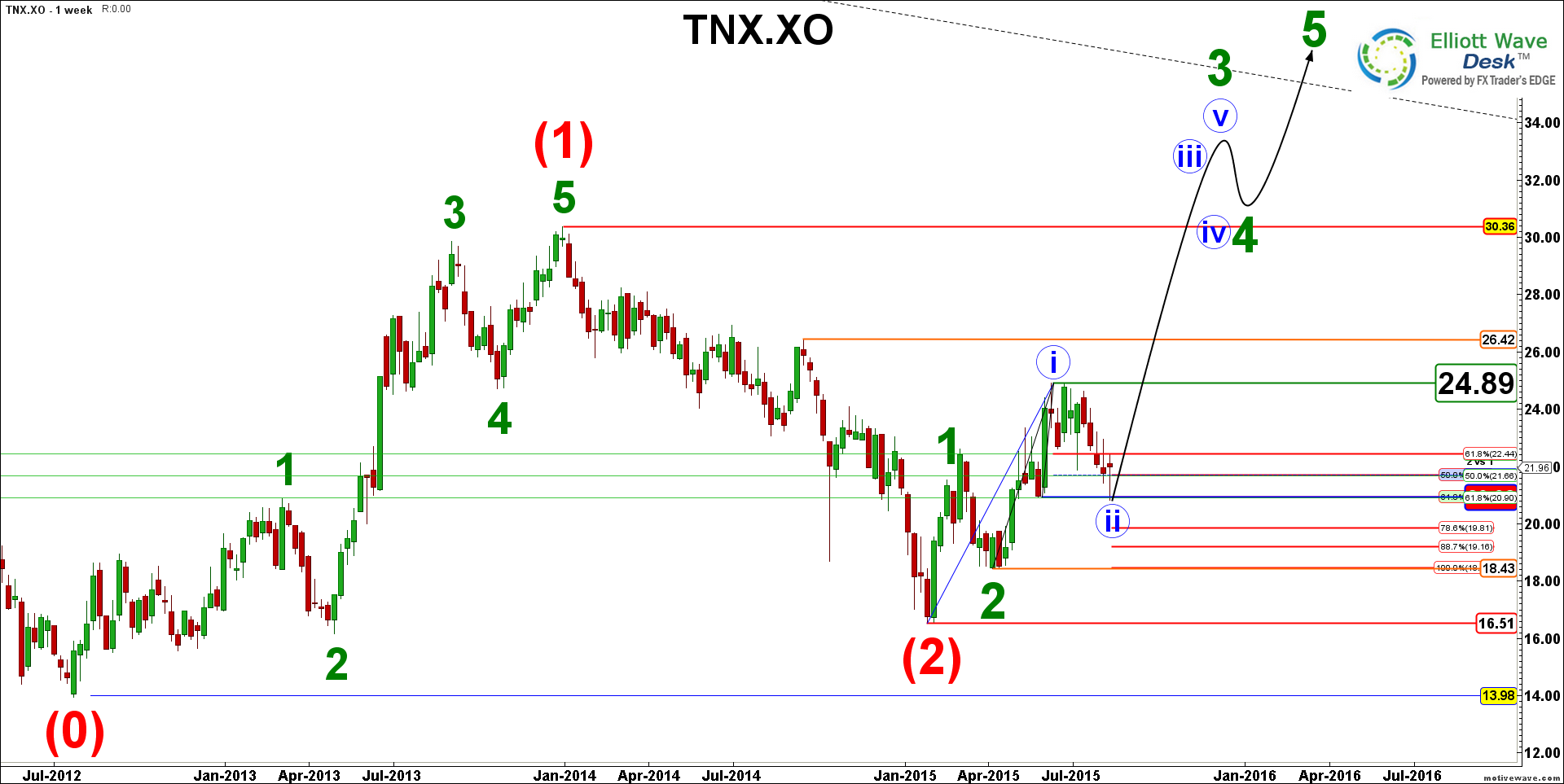 While the Dollar Index moves down in C, the 10 year looks weak. Remember that yields trend opposite their price. The 10 year yield has bounced off the 2.09 61.8% retracement of the move up from the 1.84 green 2 wave low. It closed at 2.19 Friday after falling for five consecutive weeks; however is at a possible end of a 2 wave now The buck was strengthening most of this time and is now heading down while the 10 year is sporting a weekly bullish reversal candlestick pattern. The Elliott Wave picture is also signaling a move up for rates. Regardless, I want to see the index make a daily close above the 2.24 confirming the move up.At present, there is a divergence between the buck and rates. One has to give soon. And the Elliott Wave structure on both is painting this picture. The Buck looks like it has plenty of room up and showing no signs of long term weakness at all. The BOC dropped its peg and fell a whopping 3.7% against the dollar in just two days. The Yuan had been losing to the buck since the Nov 2014 low. The move up now counts a nice 1-2-3 series. The pair should stabilize there for a wave 4. The ensuing wave 5 should take the USD/CNY above the 6.44 spike high. And if you check back to 2013, you can see that this will only be part of a larger 1-2-3 series forming up. If this move from the 2013 counts a textbook impulsive wave, the Yuan could see the 6.61 before we get a nice retracement of the move up from the 2013 low. The Yuan’s move supports dollar strength.

US stocks rallied this week but still are in bearish patterns from their respective highs. European stocks went red while Asian stocks rallied. However, as with the US, Asian stocks are in danger of falling off a cliff. The SPX 500 is still trading around the 2090 as I mentioned last week. The index has been mired in a nasty contraction since the 2119 Feb high. It should be breaking soon as the consolidation is nearing an apex. This move is most likely going to be down. Once the index moves below the 2052, it should make its way down to the 1972. Should this level fail, the index could make a run for the 1820 Oct 2014 low.

It is now 8 consecutive days in the red for oil. Crude, this week, made a new 6 year low hitting the 41.87 and closing at 42.50 Friday. The Elliott Wave structure down from the 62 May high is in need of a decent retracement. It might be that Oil is bottoming soon now the rates look to head up. It will be very unlikely for the commodity to keep falling as it has since the 61.56 June high. A move up is looming. I look for a retracement to at least the 46.88 previous contraction high.

Gold moved up considerably invalidating the wave 4 count for a 1-2 series down from the 1205 high. This move points to a bigger wave 5 drop possibly in the cards for the yellow metal. If so, the selling should commence soon. Give the extend the new 1-2 swing, price could make it to the mid-800s. The precious metal is at the end of a long impulsive series down from the 2011 all-time high. It could be the move is done now and the metal heading up in a counter corrective B wave at intermediate degree. If so price could make it to as high as the 1500. A move above the 1180 is needed to confirm this view. Till then the lean is down for gold.