As I am sure you all know, last week was a nightmare. Greece, China, and the bad employment numbers out of the States in the end were bad for Stocks, Gold, Oil, Bonds and the Buck. From the bigger picture however and despite the very dovish Non Farms print, the buck has held on well and is still trading well above the 93.13 April 30 low. Given the extend the move up from the 78.90 Apr 2014 low, the drop down from the near 100 high has not even made it to the 38.2% of the move up from the 78.90 low. The Non Farms Print came in softer than expected at 223k vs. the 230k expected. But the dovishness came in with the participation rate dropping to 62.6% from last month’s 62.9%. This threw cold water on the better than expected drop in the unemployment rate which the Fed stopped looking at long ago. Both the participation rate and average hourly earnings missed, leaving the Fed with very little wiggle room.

However, I don’t know if this is going to put the spoiler on the Buck for the markets know this. Nothing is going the Fed’s way with the “data.” If the Fed raises rates now, it will definitely catch the markets by surprise because things are abysmal all over the globe as credit markets begin to unwind—the media is loud with advice on pushing a rate hike down the road too. How much it will help, i expect not much.

Technically the big news was oil’s falling through channel support leaving behind a series bearish 1-2s. This is a significant move for it and the Buck which have been trading inversely of each other. If the drops in oil continues as the longer term trend is pointing to, the buck should do well and possibly break to new highs sooner than expected—it does depend on how deep and how fast oil drops. Even though both the Buck and Oil sold off after Thursday’s Non Farms print, oil has dropped The EW count on Crude is pointing to a nasty drop if something doesn’t support price soon. Below the 54.80 and 54 its the 52, From there the next hurdles are the 44 and the 42. Keep in mind that Crude has plenty of room down to the low 30s.

After sliding down very correctively from the 1187 June 28th high, Gold moved up on Thursday’s Non Farm’s print leaving the move down to new lows in question. Because of the very choppy move down from the 1187 April 28th high, and the fact that silver has cut out a similar pattern and looks like it too needs to move up once more to compete a contracting triangle I believe is still forming on the metals up from their April 2014 lows. I expect the metals to rally this week but not by much if oil is heading down now. Rates have moved up on the week; however, fell sharply after gapping up near the 2.45 high closing the week at the 2.39 handle down 10 basis points of the near high. It is hard to tell from this chart alone where rates are heading. The normal dance is oil down rates down and that is how it has been playing out lately. If crude is heading down once again, we can expect rates to do so also. However, the move down might not make it to new all-time lows. 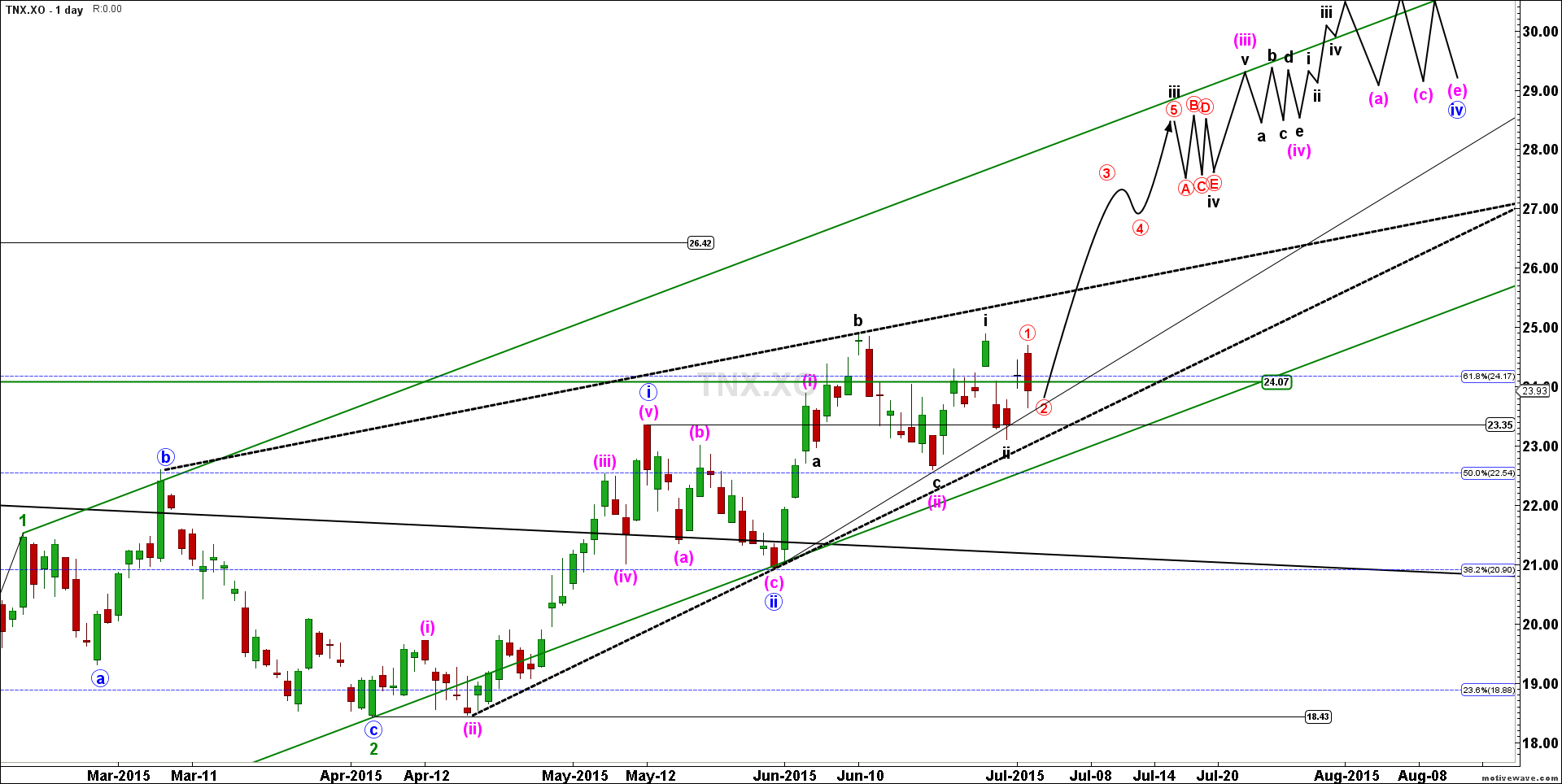 The count in the chart you see for the CBOE US 10 year yield shows a series of 1-2s up because technically that is the most probable count at this juncture. However, it could be that the move up from the Jan 30th 2015 low is a complete leading diagonal series at the 2.49 near high. Or a series of 1-2s up you see in the chart. The first scenario would leave rates vulnerable to a 61.8% retracement of the move up from the Jan 2015 low. If it is the count you see in the chart, then we should get a move up soon in a third wave run to the 3.03. But if Oil does bring rates down as is the norm, then we can expect rates to head down possibly below the 1.65%. If this drop is deep, and makes it below the 1.65% Jan 2015 low, the count down from the 3.03 high will be tracked as an extension of the supposed wave 2 at intermediate degree. It depends how bad things get for oil.

The SPX 500 has cut out a three wave corrective series down form the 2134 all-time high. A clear head and shoulders pattern has formed with the recent 2056 Thursday’s low. The recent move up from Thursday’s low should run out of steam soon. The index could move up as high as the 2100 before moving down to either complete a leading diagonal series down from the all-time high or the first three legs of wave 1 of a bigger diagonal forming down to very low lows. I feel the party is unraveling right now. How fast and fierce I don’t know. I have always underestimated Central Bankers. But you cant deny that too many big bets were made on a big future that has not come. And the evidence is indisputable. Marco numbers all over the planet are pointing to economic contraction; and, the only thing that is any good can be easily argued against. Take housing numbers which are only good on the high with most of demand coming form over seas. And now the Stock market, which is the only other thing the US has to boast for, is now tanking while Europe is dealing with Greece, while China implodes, while the Middle East burns, while Ukraine…