The recent high on the S&P confirms a completed five wave advance, which started at the June 2013 1560.33 low. This five wave sequence completes the minor degree third wave advance which started at the June 2012 1266.64 low. One the 4 hour, a minuette five wave move has finalized at the 1867.89 putting the S&P at the start of a minor 4th wave. We can expect a corrective sequence down between 1737 and 1712—the previous minuette 4th wave and the 100% 4 vs. 2 wave. Being that the index is in a 4th wave at minor degree, the current move could very turn out to be a flat wave structure. Counting the intermediate C wave up from Dec 2011 1202.37 low, the now finalizing minor five wave sequence would require a 6 to 7% 4th correction so that proportional standards are satisfied. Measuring minor wave 2 vs. 4, this would necessitate a move down from current levels to about the 1691, taking approximately two weeks to complete. 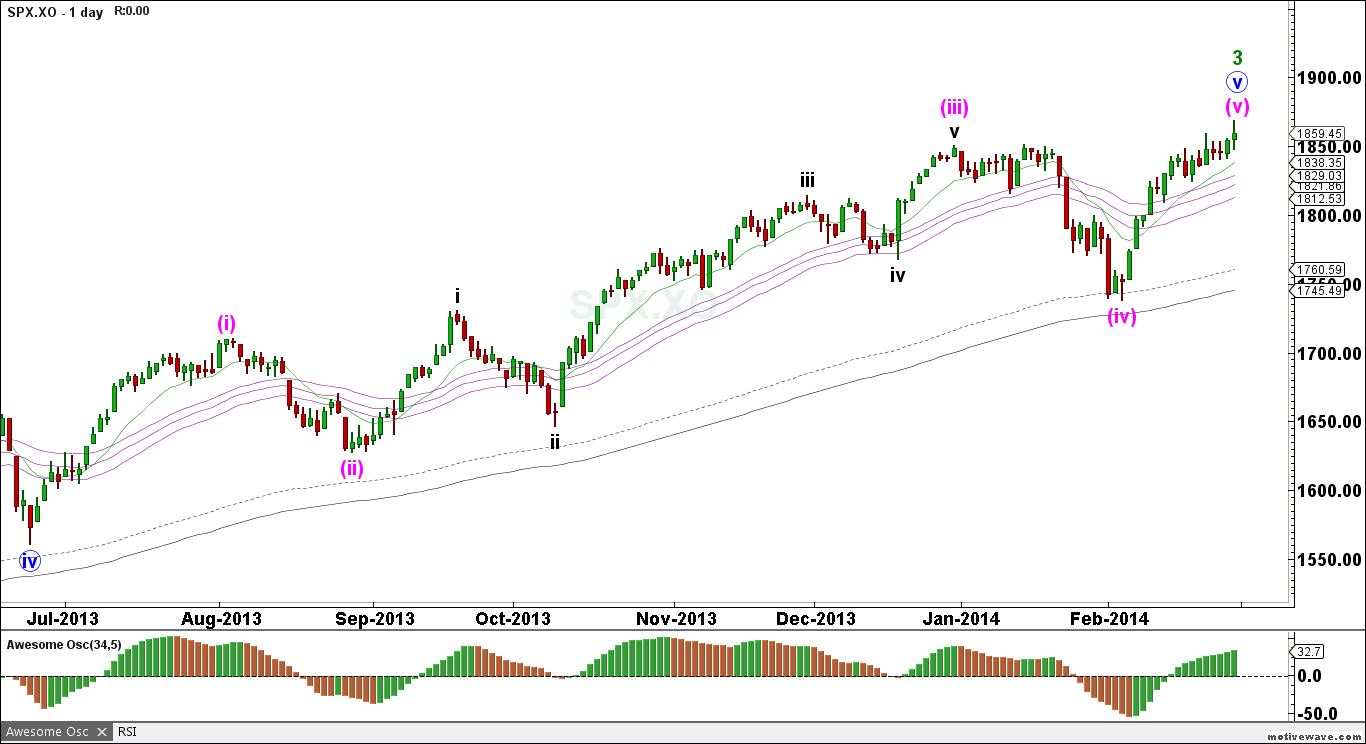 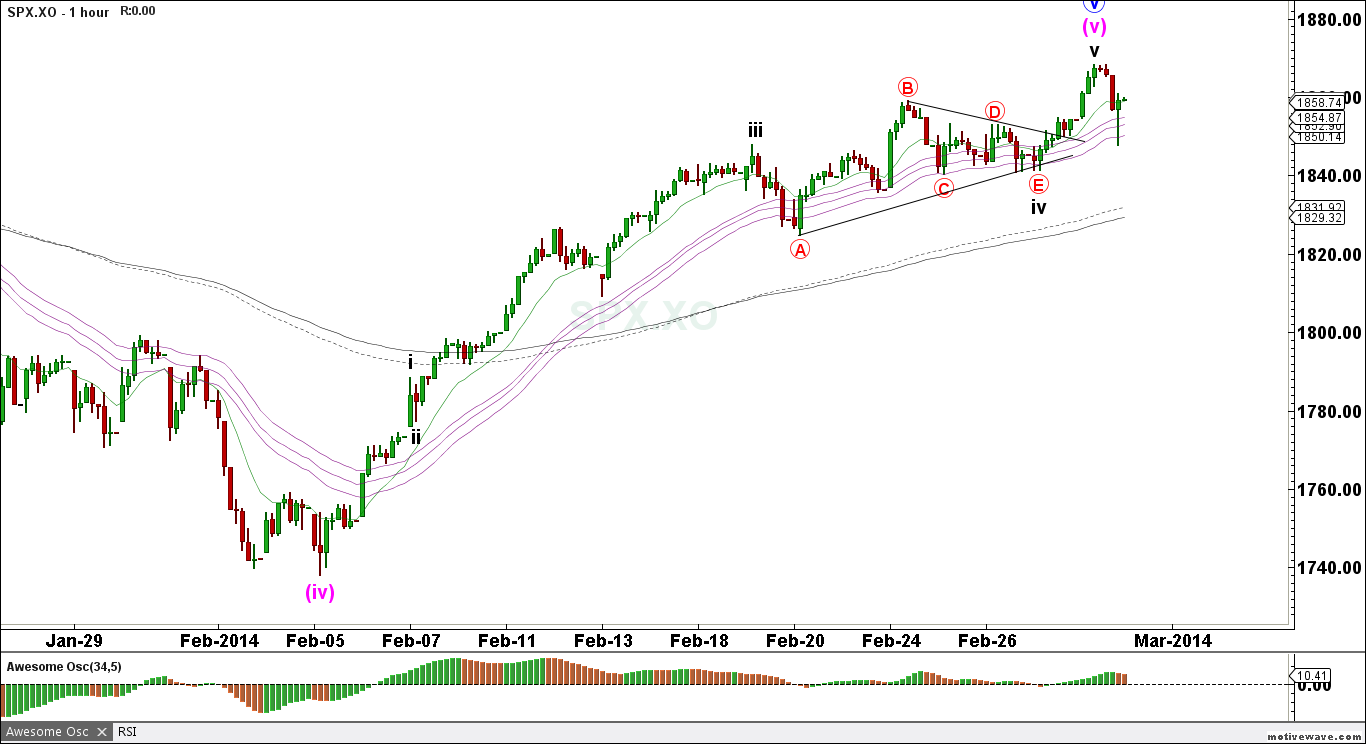 Confirming this outlook is the Dow’s completed minor 3rd wave at the Dec 31st 16588 high. This puts the Dow in a 4th wave corrective structure that could either turn out to be a zigzag or a flat construction which has just completed an A wave of the larger B wave. Given the new fifth wave high on the S&P, the apparent A wave move up on the Dow from the Feb 5th low to currently levels, the Dow could push up in a B wave flat to new highs before heading down to the previous minute degree 4th wave low at 14719. Additionally, being that minor degree wave two is a zigzag, the flat scenario is more likely if the structure alternates. The completion of both the Dow and the S&P’s third of third wave corrections will put the indices in fifth wave moves to new highs no later than the latter part of March.

Structures in the NASDAQ and Transportation are also confirming recent developments in the Dow and S&P. The NASDAQ’s move up from the Nov 2012 low is overextended with choppy yet very shallow retracements putting it at risk of a major move down soon. On the weekly, the Awesome has diverged on the Feb 21st 2014 high at 4347. The NAS will most definitely trail the majors down for a break of both the long term Jan 2004/Oct 2007 trend line support and the Minor degree upper channel line confluence which has now become resistance. Both these trend lines were tested on the Feb 2nd 3968 low and held. The NAS could very well test it again in wave two to the 78.6% retracement of the move up from the tested low. The move up off the test can be counted as a completed five wave sequence on the one hour which has completed at the Feb 18th 4277 high. From there, the move down down to the Feb 20th 4226 and up to the new high at 4342 would have to be A and B waves of a flat correction for a wave two minuette degree.

Transportation needs to move down in a three wave move from current levels to complete a double zigzag formation for a wave 4 at minute degree. Y vs. W wave equality is at 6833. From there, the Transportation averages should finally break to new highs along with the other major indexes by mid-March.

It is quite apparent that the stock market is expecting the Fed to pull back on the taper due to the poor fundamentals that have been coming out. Meanwhile across the Atlantic, even though the numbers have been coming out mixed, they have been better than the misses in the States. It is interesting how yields spiked on Friday while the Dollar tanked. However the 10 year gave back much of its daily gains to close two basis points in the green and down for the week while yields gained in Europe. The move up in the 10 year yield led the way up for stocks on the 3rd of Feb and just might lead them down for rates have been sliding down since the Feb 21st corrective top at 2.78%. On the hourly, the move down can be counted at as having completed a wave 4 on Friday afternoon with a move down for a wave one of a fifth to close. There are two good scenarios which both point down for yields in the month to come. One has the 10 year in an expanded flat that started at the Sept 5th wave 1 top at 2.98%. If so, then the 10 year could be in a wave three of a C wave down to the 2.21%, which is the 161.8% A vs. C. The other scenario has the 10 year in a C of a zigzag down to the 2.32% that began at the wave 1 top on Dec 31st at the 3.03. Both versions agree on the current direction with the flat going further buy about ten basis points.

With the test of the 79.69, the US Dollar Index almost invalidated the 1-2-1-2 series originating back on Oct 25th 78.99 low. A one wave can retrace 100% without invalidating the count. If the buck falls below the 78.99 then the move down from the Nov 8th 81.58 high would be counted as a complex three wave corrective move which still keeps the larger bullish bias to new highs for the Greenback. The week ahead has the ECB, RBA, the BoC and the BoE making monetary policy announcements and should shake the buck out of its current range. Moreover things are heading up fast over in Eastern Europe and the emerging market crisis is still in full swing.

Gold and silver took a breather this past week in corrective 4th waves off of their 4-month highs. Gold pulled back off of 1345 while silver off of its 22.22 high. The metals could push down in one more swing on the hourlies before heading up to complete fifth waves of corrective flat structures which started back at the June 2013 lows. Gold should finalize its upward movement just past the 1400 while silver just past 24 bucks.

The metals have been moving up ever since the poor fundamentals out of the US. Market analysts are now wondering if the Fed might just pull back on the taper. If this week’s Non Farms misses, it would put Yellen in a bad spot and could send the metals to new highs and the buck to new lows.